It’s long been known that you can manually figure out the combination that unlocks any given 40-digit Master combination lock. But hacker Samy Kamkar discovered that the three numbers that open such locks are related to each other. This allowed him to build a compact device that can crack such locks open in a few minutes, or even within seconds. 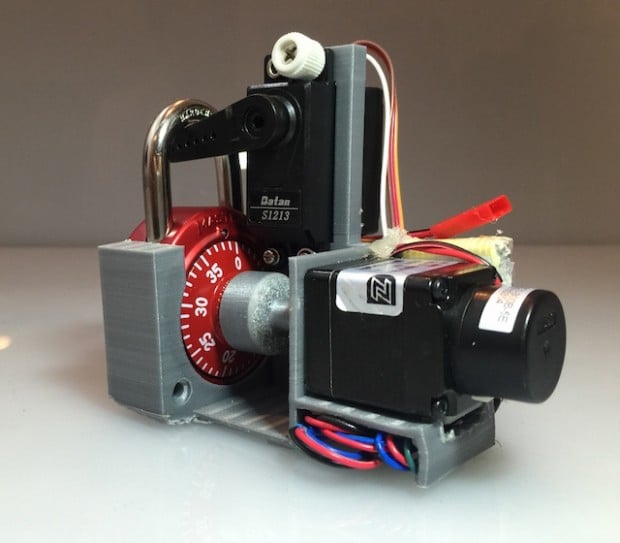 Samy calls his lock cracker the Combo Breaker. It’s main components are a stepper motor, a rotary encoder, an Arduino Nano and a Samy’s custom designed and 3D printed handle to grip the lock’s dial.

The Combo Breaker can guess all three numbers on its own within a few minutes, but if you manually find the first number that makes the dial get stuck when you pull on the shackle, then Samy’s device can open the Master combination lock within 30 seconds, using a maximum of only eight attempts. To be more precise, Samy’s technique will give you the exact first and third numbers of the combination, plus eight possible second numbers. Samy made an online calculator that demonstrates his technique, which you can see him demonstrate below:

High school kids hate him! Head to Samy’s blog to find out how he built the Combo Breaker. Check out his teardown of a Master combination lock or his Wonder HowTo article if you’d like to find out how he came up with his shortcut. And don’t buy this lock anymore.