Last year we looked at Harvard University’s prototype for a robot that folds itself up from a flat shape into a spider-like form when exposed to heat. This small…device invented by MIT and TU Munich researchers has a similar feature, but I don’t know if I should call it a robot. 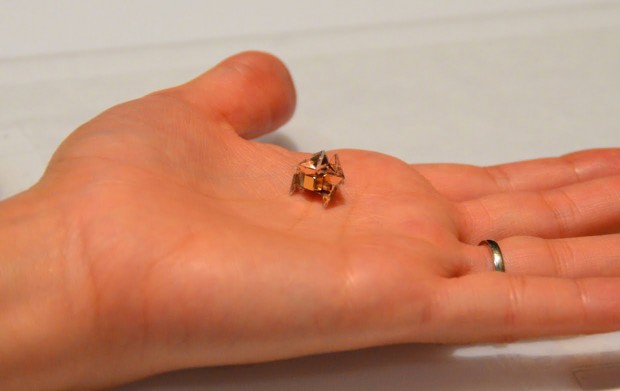 This “miniature origami robot” is nothing but a neodymium magnet and thin layers of PVC encased in paper or polystyrene body. As with Harvard University’s bot, this tiny worker’s body has been laser cut such that it will fold itself into shape when exposed to heat.

Thus, this mindless package of reactive materials can be made to walk, climb, swim and carry or push other objects. When you’re done using it, you can steer it into a vat of acetone to destroy its body while leaving the magnet inside intact for further use.

I’m not a roboticist, but it seems to me like this is not really a robot but a clever application of programmable materials. It could be part of a robotic system if the machine that handles EM coils are programmable, but if this is a robot then I guess we can call iron filings robots too. Semantics aside, I think these kinds of stimuli-responding devices – stimborgs? – have a lot of potential and are just as fascinating as programmed machines.

[via IEEE via Gizmodo]