Two Bit Circus – makers of the Hexacade – came up with a thrilling version of the dunk tank that Immortan Joe and his War Boys would approve of. Instead of being dropped into water, the person inside the Flambé gets doused in flames while wearing a flame retardant suit. 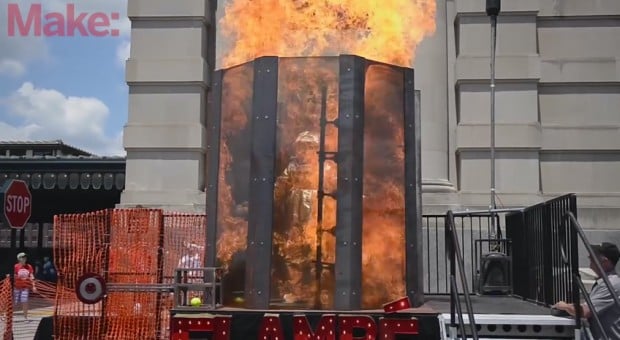 Two Bit Circus made Flambé for the 2014 STEAM Carnival, but they also had it on display at this year’s Maker Faire Kansas City.

MAKE: says that while the Flambé is as hot as it looks – they say you could feel the heat from the booth even from 50ft. away – Two Bit Circus does have safety precautions in place and the local fire department stood by to monitor its setup and performance.

Let’s hope it never takes anyone to Valhalla. You can check out the Flambé in person at this year’s STEAM Carnival on 11/6 to 11/8.

[via MAKE: via Devour]