Ever since Dremel first introduced its Idea Builder 3D printer last year, I’ve been excited to get my hands on one. From everything I’ve seen and heard, it appears to be a very good value for an easy to use and versatile 3D printer. Fortunately, Dremel was kind enough to put one in my hands for review. 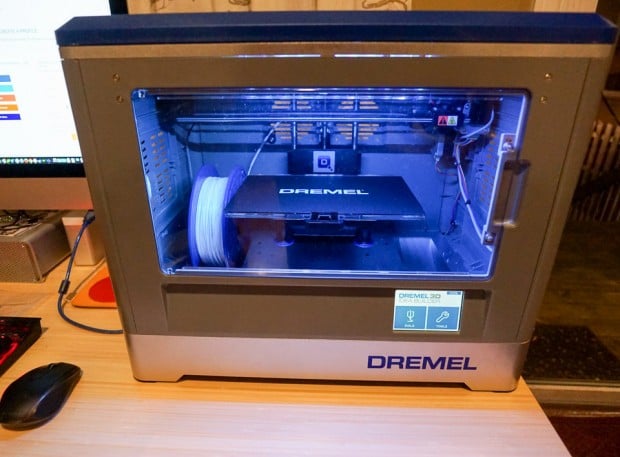 Unlike some 3D printers, the Dremel Idea Builder is targeted at makers and hobbyists who don’t want to spend a ton of time tinkering with settings and calibration, and just want to get down to printing objects. In keeping with that goal, setting up the printer is nice and easy – no more complex than unpacking an inkjet or laser printer. 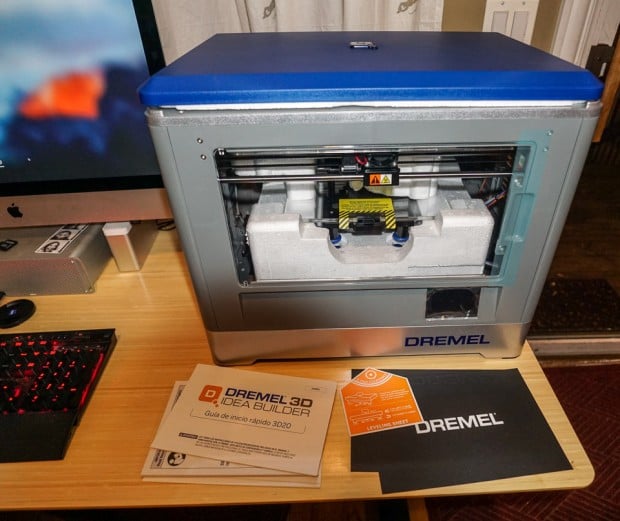 Simply remove a couple of pieces of styrofoam, snap the removable printing bed out, set a spool of filament on the reel, thread it and power on. Then press the “load filament” button, and the heating element pulls in the filament. The final step is to snap the build platform back in place and level it. This process is very straightforward – just press the “level” button and follow the on-screen instructions while sliding the included leveling sheet under the extruder head. I took me less than 10 minutes from the time I opened the box until I had my first 3D print started. If at any point along the way, you don’t feel like reading the manual, Dremel provides a great series of “How-To” videos on their website.

The Idea Builder appears to be well built, and very substantial. It’s quieter than many of the 3D printers I’ve played with, and thanks to its ventilated enclosure, it doesn’t leave your workspace smelling like melted plastic. Interacting with the printer is done via a full color LCD touchscreen, and you can print models without a computer attached. 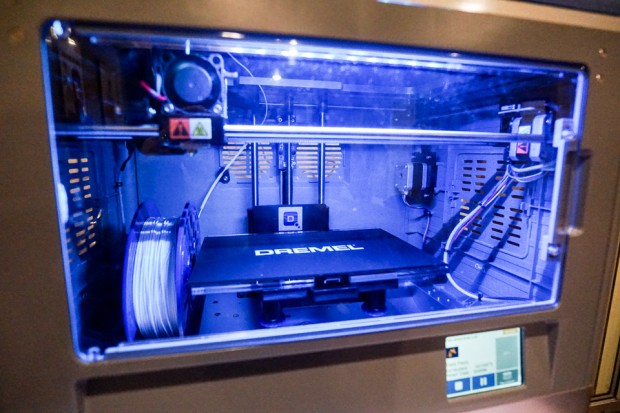 The Idea Builder prints using PLA filament, which Dremel sells in a variety of colors. Reels sell for about $30 each, and the amount you can print depends on the size of your models. Dremel estimates that you can build 36 small models, 14 medium models, or 34 large models per reel. Build volume for the printer is 9” x 5.9” x 5.5” (230mm x 150mm x 140mm), and resolution can be specified at 100, 200 or 300 microns. At the lower resolutions, you’ll see thicker and more obvious layers, but your designs will print faster. Higher resolutions offer smoother models, but at the expense of time. 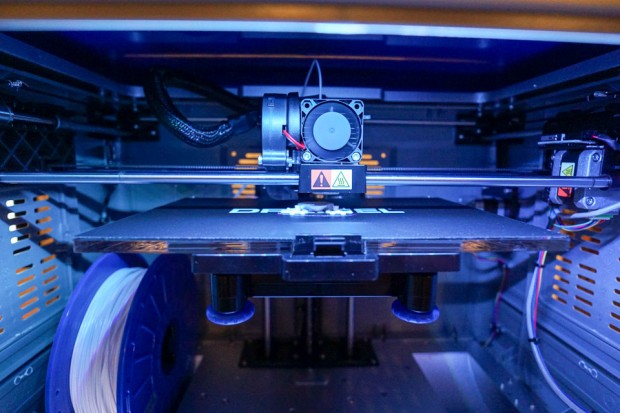 3D files can be loaded onto the printer in a standalone mode using an SD card, or via the free Idea Builder software, available from the Dremel website for Windows, Mac and Ubuntu Linux systems. Files on SD card must be converted to Dremel’s proprietary .g3drem format, while the Idea Builder software can convert and print files in the much more common .STL format, as well as Dremel’s .3dremel model format. 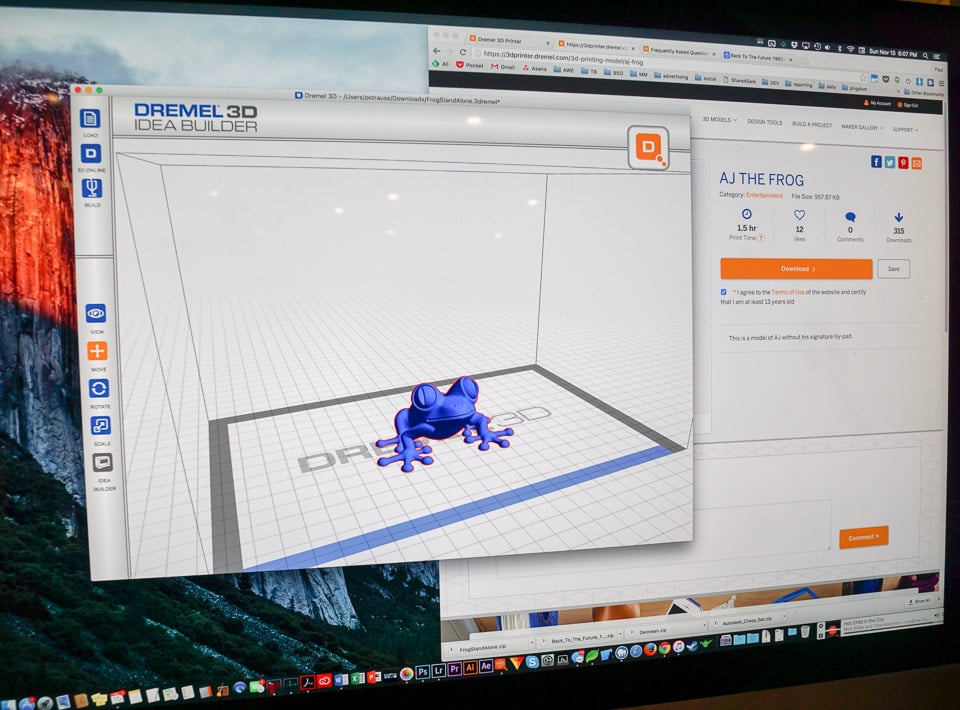 I found the Idea Builder software to be very easy to use. Under the hood, the software is based on a highly customized version of Slic3r, with special optimizations for Dremel’s hardware and filament. Since Dremel wanted the software to be as easy to use as possible, their app doesn’t offer all of the precision controls of Slic3r, but it’s also less likely to frustrate beginners. Simply open your 3D file, scale, rotate and position your object on the print bed, then hit the “Build” button to either print it via USB or to save it to an SD card. The only hiccup I encountered is that I didn’t realize I needed to select “connect” from the Build menu before printing via USB. 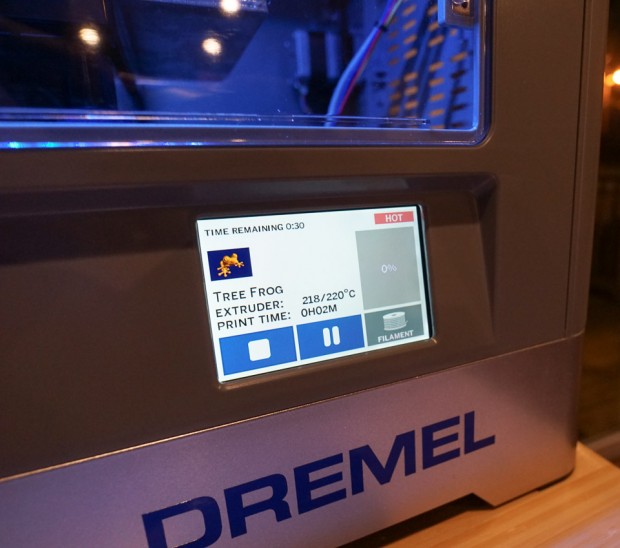 I loaded up a number of different models, and found that the designs that Dremel provides on its website are the easiest to print without any tweaking. There are tons of free STL models out there in places like Thingiverse, but many of them are unvetted, and need to have supports added, or are too delicate to print on the Idea Builder. That said, I was able to output several of these STL models (including a tiny car and a TARDIS) without problems. An intricate Millennium Falcon model failed to convert to Dremel’s format properly, and an intricate open geometric mesh collapsed on itself. It’s possible that these models could be prepared with other software to add support structures. There are a couple of other applications which can also print to the Idea Builder including Autodesk’s free MeshMixer, and the pricey, but slick Simplify3D. Microsoft’s 3D Builder app can also generate .g3drem files. 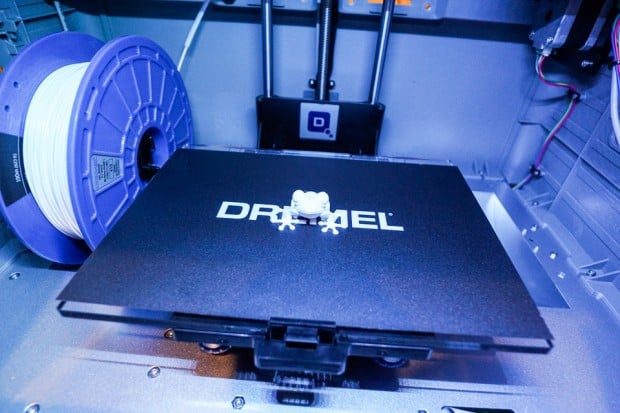 It’s critical with 3D printing that models adhere to the build platform or else they won’t form properly and you’ll end up with a messy blob of plastic. While the common solution is to stick blue painters tape on the build platform between builds, Dremel provides a couple of reusable build sheets which should last for up to 100 prints each. These can be reordered for $30 for a pack of three. I found that models adhered well to the sheets, and peeled off pretty easily once cooled. If you have any trouble removing the model, there’s an included spatula to help. 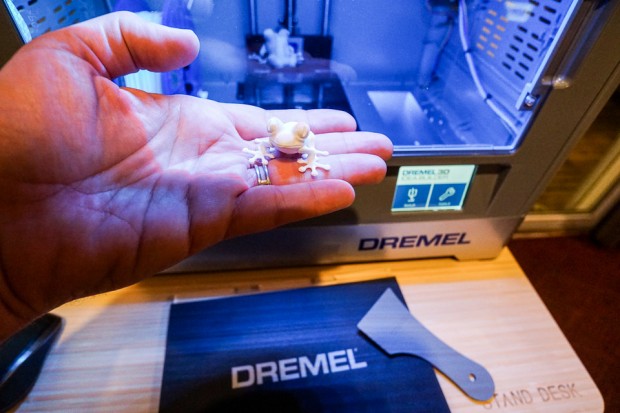 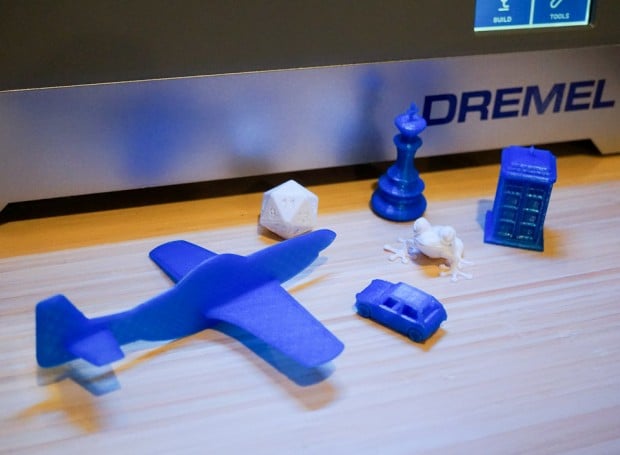 Of the various prints I generated with the Idea Builder, they ranged in print time from as little as 30 minutes to about 2 hours, but print time is completely dependent on the complexity and size of your model. There are intricate models out there that can take 4 to 6 hours or more. In the realm of extruder-based 3D printers, the Idea Builder is reasonably fast. 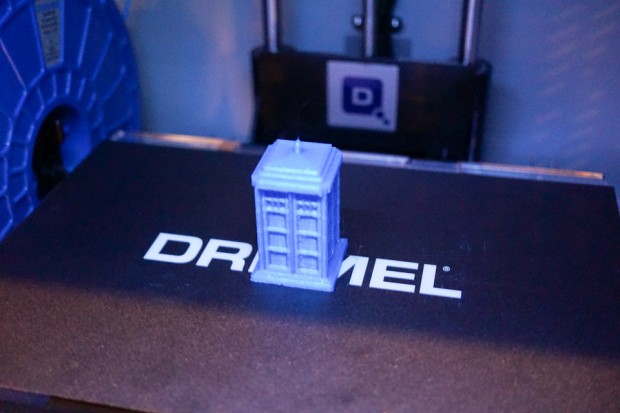 Priced at $999(USD), the Dremel 3D Idea Builder offers very good value for anyone who wants to get started in the realm of 3D printing without the challenges and complexities of many of the other models on the market. You can find the Idea Builder at Amazon, Home Depot and Lowe’s stores.