A couple of years ago, QWOP creator Bennett Foddy made a multiplayer variant of speed chess in which everyone could move their pieces at the same time. It makes for hilarious and hectic games, especially if there are many players. I don’t know if it saw Foddy’s Speed Chess, but Japanese developer Team Blitz took the madness down a notch by moving the timer from the players to the pieces. 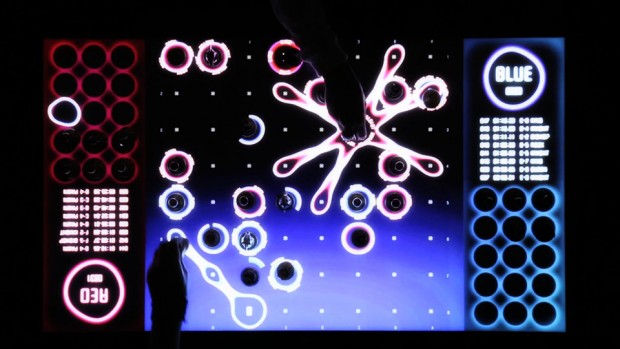 In 電撃戦 Speed Chess (Blitzkrieg Speed Chess), each piece has a cooldown period before it can be moved again. I’m no chess expert, so from my perspective what that does is force players to know when to wait and when to strike. It wouldn’t surprise me if players with fast reflexes have a slight advantage in this game, but obviously thinking fast remains the key here.

Because it would be impossible to enforce its rules on a normal chessboard, Blitzkrieg Speed Chess is played on a computer with a multitouch display. It seems like the pieces also have some sort of tag that lets the computer identify and track them. The computer speeds things up in several ways. First off, it displays a circle around each piece that can be moved. When you move a piece the circle around it disappears and gradually grows back to indicate the cooldown period. The display also points out the possible destinations of the currently active piece or pieces. Finally, player’s moves are noted on either edge of the display. 4Gamer caught up with Team Blitz at the 2015 Tokyo Game Show last September:

It seems like the game is still being developed so its mechanics and interface could change before it’s out. That said, I am wondering what’s stopping a player from moving a piece that’s still on a cooldown. Does the game have a warning or penalty in place, or will it be like a board game where it’s on players to stop illegal moves?

[via 4Gamer via Digg]