A few years ago, we saw that Microsoft’s Kinect sensor could be used to control a quadcopter with hand gestures. In the future, we might be able to do that and more using wearable devices, thanks to Taiwanese company PVD+. Reuters says the company recently held a public demonstration wherein PVD+ co-founder Mark Ven controlled a Parrot Bebop drone using hand gestures, a feat made possible by an Apple Watch that was running the company’s software. 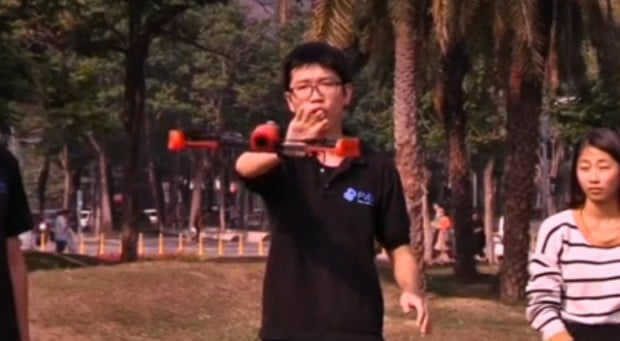 PVD+ was founded by a group of students and a professor from National Chung Hsing University (NCHU). The group calls its software Dong, which is apparently a homonym of the Mandarin word for “move.” Which makes a lot of sense, but doesn’t make it less funny for English speakers. We don’t have specifics on Dong – see? – but based on this NCHU article and Reuters’ report, it appears that the company’s technology involves cloud computing. Dong can also be integrated with home automation systems. In Reuters’ video, Ven can be seen changing an LED bulb’s color by writing letters in mid-air.

If this software is legit, it’s going to make wearable devices a lot more compelling. It has a lot of fun – and fearsome – applications, and I’m sure people with disabilities could benefit greatly from a compact and portable gesture control system. Someday PVD+’s Dong might be everywhere, controlling everything.

[via Reuters via Engadget]