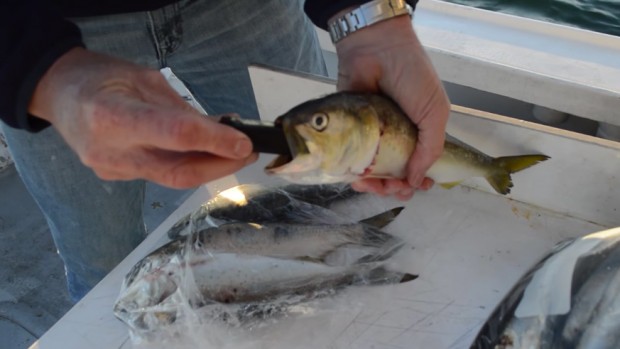 Zombait can be used with fish between 7″ to 16″ long. You tie it to your line, insert it through the fish’s mouth and then sew the fish’s mouth shut. Zombait – and thus the fish – will start moving when it makes contact with saltwater. It doesn’t appear to have other settings or controls, but the Zombait team are confident that making dead bait wriggle is as good as having live bait.

Zombait should last up to 3h per charge, but you can bring along extra batteries and swap them in if needed. Should you lose the host fish, you should still be able to retrieve Zombait along with your hook.

Here’s more of the swimming dead in action:

Pledge at least $54 (USD) on Kickstarter to receive a Zombait as a reward. At this rate, it doesn’t look like Rink and his co-creators are going to reach their target goal of $27,000 (USD). I bet they’d attract more backers if they had videos of Zombait actually catching fish.