Dayton, Ohio based art collective Real Art had a great idea for a Mortal Kombat style video game so they got to work and built an arcade cabinet. But this version of Mortal Kombat is a little different. It’s called War of Currents and it pits Nikola Tesla against Thomas Edison. Ready?!? Fight! 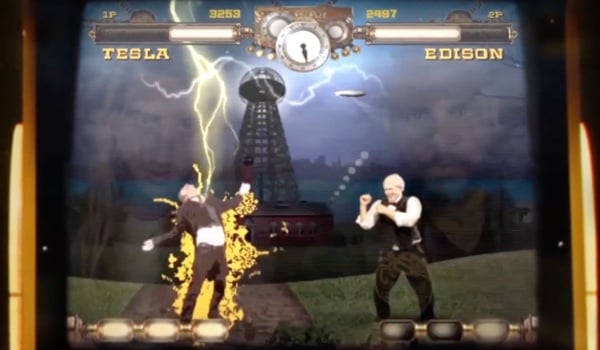 Tesla and Edison are the only fighters and they feature appropriately-themed electric powers. It gets better though. Shocking in fact. When you charge up and use your super-move, it shocks the other player with real electricity. That’s thanks to a custom-built conductive joystick.

This game was built for the Dayton-based Proto BuildBar, which they describe as “part 3D printing lab, part electronic maker space, and part café.” They unveiled it at this year’s SXSW, and it was nominated for a SXSW Innovation Award. If Only Tesla and Edison were around to battle it out on this machine.