Raumfeld may not be a well known name here in the U.S., but they’ve been making high end audio gear in Germany since 2008. Recently, the company started selling its premium wireless audio systems here in the States.

I’ve currently got my hands on a few of their systems, and the first one I’ve had a chance to test are the Raumfeld Sound Cubes. These 7.7″ cube-shaped speakers are the perfect size for a bookshelf system or for those looking to seriously up the sound quality from their desktop computer system. 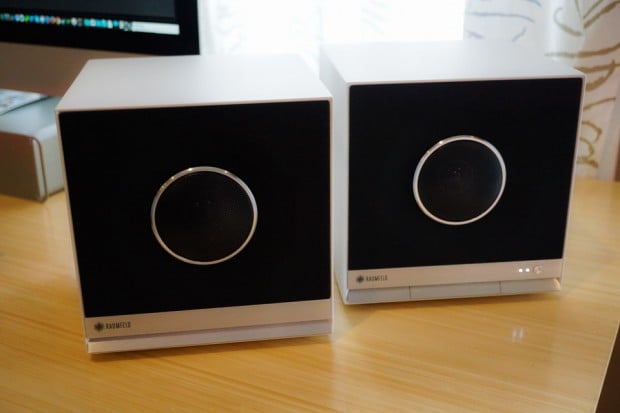 It took no more than a few seconds to realize that these speakers mean business, from their excellent build quality, using smoothly finished MDF wood enclosures with aluminum trim, to their unique and stylish industrial design. While some speakers are best heard and not seen, Raumfeld has nailed it on both fronts.

Sound Cubes are a fully-powered system, with the master speaker carrying a 160-watt amplifier, which sends 40 watts RMS to each tweeter and mid/bass channel. Each speaker has a 1.1″ tweeter and a 5.1″ midrange/bass driver. Total frequency response is rated at 62-20,000 Hz. 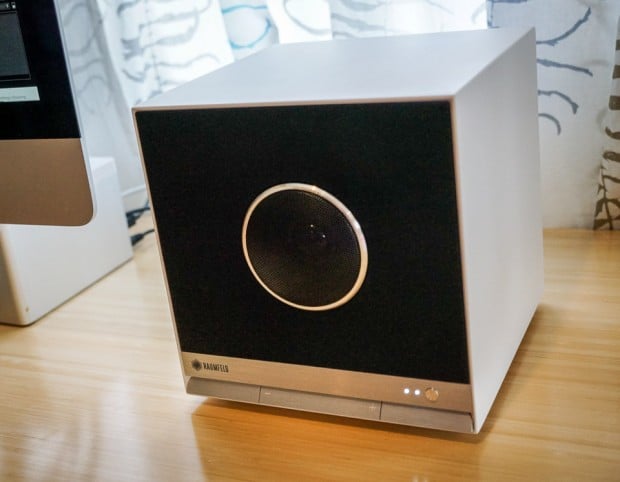 Setting up the Sound Cubes system is easy. Just plug into power, and connect the slave speaker via the included 1/4″ stereo cable. Then download the Raumfeld app on your iOS or Android device to connect to your network via Wi-Fi or Ethernet, and you can start streaming audio to the speakers. The Raumfeld wireless ecosystem supports a multiroom setup, and can stream different tracks to different rooms. You can run the system on either your existing network, or via a secondary network using Raumfeld’s optional (and very reasonably priced) Expand, which establishes an autonomous wireless network for your audio gear without putting strain on your main network. 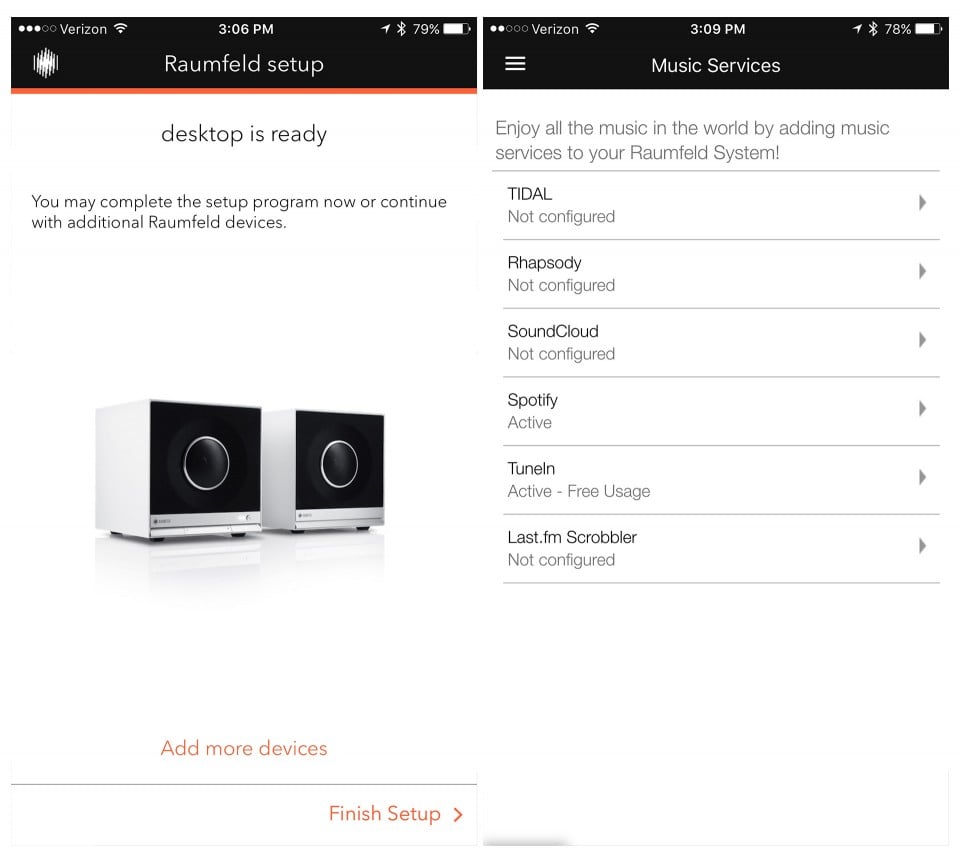 The speakers also offer RCA stereo line-in inputs, and a USB port for plugging in a flash drive as an audio source. While I thought there might be drawbacks to playing music via the RCA inputs (since the Sound Cubes lack an optical input), my pretty well-trained ears were pleasantly impressed with the analog audio quality, with my iMac plugged in as the audio source. If you need to make any tweaks, you can adjust the line-in gain via the Raumfeld app. 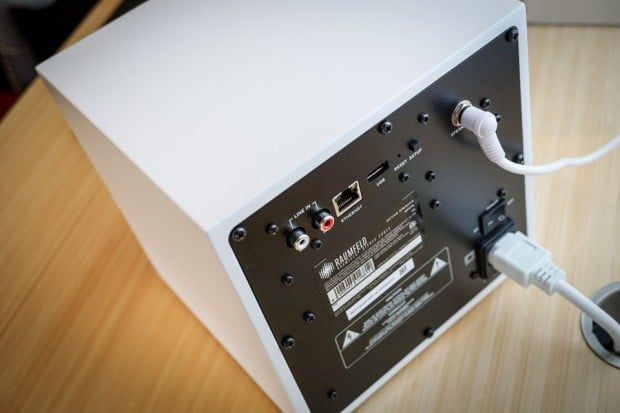 The speakers support a variety of sources, including audio tracks stored on your network on an NAS, UPnP or DLNA media server, or on a USB flash drive. Audio files are supported in MP3, AAC, WMA, WAV, OGG, FLAC, and Apple Lossless formats at up to 192 kHz sample rates. Network-stored audio tracks are all displayed in a unified interface, regardless of source, and you can even create playlists across sources. 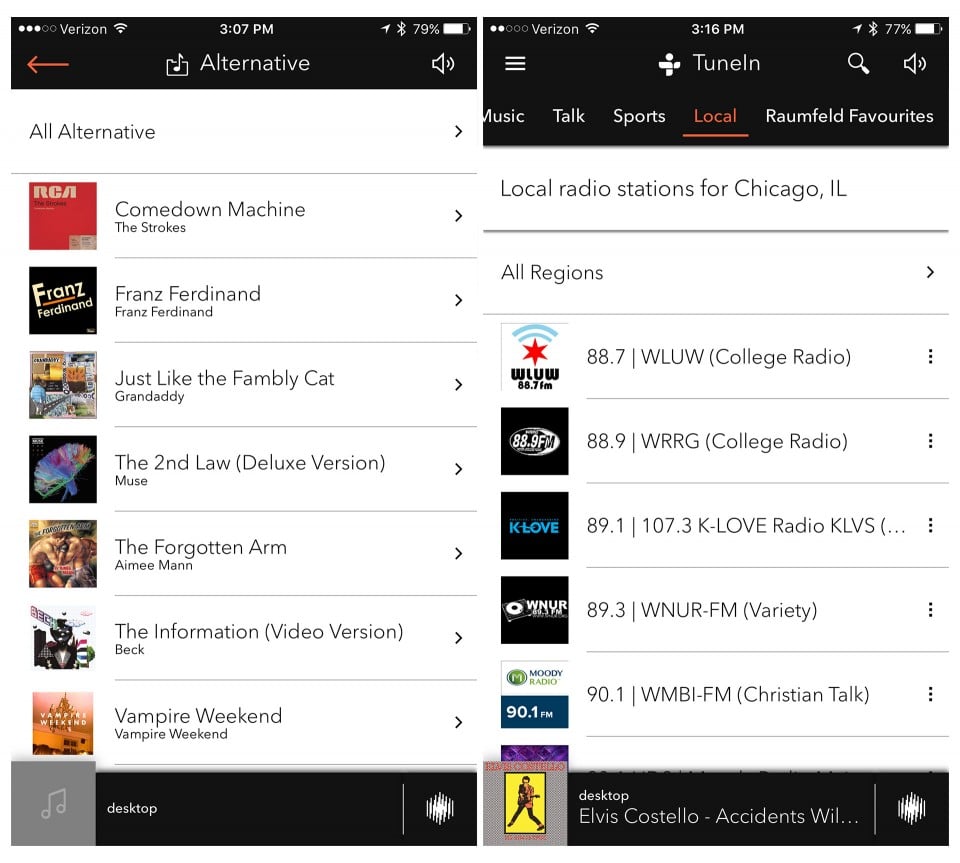 You can also stream audio tracks from your mobile device’s local audio library, though you cannot stream music from Google Play or Apple Music at this point – which is a bit of a bummer. The GoogleCast integration will soon solve that issue for Google Play, however, there’s no word on Apple Music support.

Sound quality is exceptional, free of perceptible distortion, offering tremendous depth and warmth, and a wonderfully wide open soundstage. Vocals shine, bass is satisfying but not overdone, and highs are bright without being tinny in the least. From the punchy bass and electro-snare rhythms of LCD Soundsystem’s Pow Pow, to the smooth and sultry vocals of Sade’s Is It a Crime?, to the dynamic alt-rock sounds of Santigold’s L.E.S. Artistes, I could find not a single track that didn’t shine on Raumfeld’s small but mighty bookshelf speakers. 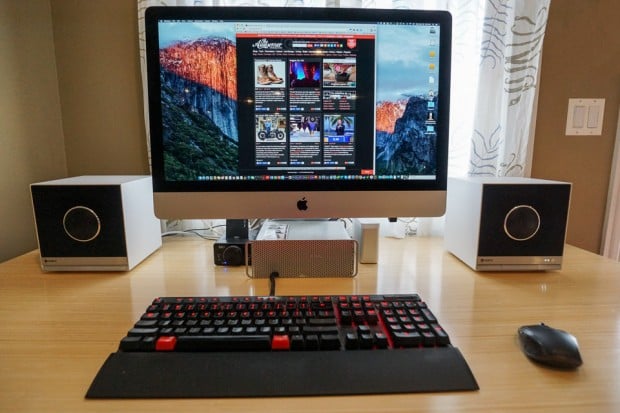 I can say without question that I love these speakers. They produce amazingly good audio quality despite their relatively small size, and are impeccably built. If there’s any downside, it’s the lack of support for Apple’s and Google’s own streaming services. With GoogleCast support coming, they’ll be near perfect, though I’d still love Apple Music or AirPlay support. Still I can overlook those shortfalls because they just sound so damned good.

Raumfeld Sound Cubes are available from Amazon for $699(USD) for a pair, and are available in either white or black cabinet designs.