Growing up, my brother was a nervous sort and you could freak him out easily with just about any toy that moved on its own. I’m pretty sure it had to do with the flick Child’s Play that we stayed up and watched late one night or maybe Maximum Overdrive, where everything wanted to kill you. At any rate, I frequently sent him into a panic by driving my remote controlled car into his room and crashing it into him repeatedly. 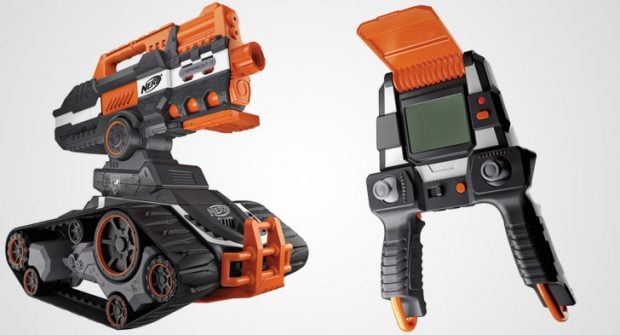 If we had this NERF Terrascout RC Drone Blaster, not only could I crash it into him, I could also shoot him right in the nads with a foam dart. We all know that’s the best place to aim for in a NERF war. The Terrascout has dart shooter that can hold up to 18 darts at once. That means you can get multiple nad shots off before you have to reload. It has tank treads for off-road capability and a 720p video recorder so you can record the nad shots to laugh about later.

The Terrascout will launch this fall for about $200.

[via RSVLTS via Nerd Approved]