As part of a celebration to commemorate the 500th anniversary of the Reformation, a church in Germany has created a robot priest. Why not? Robots are going to kill us all dead one day, they might as well save our souls beforehand. I suppose that raises an interesting question: Does God listen to robot priests? 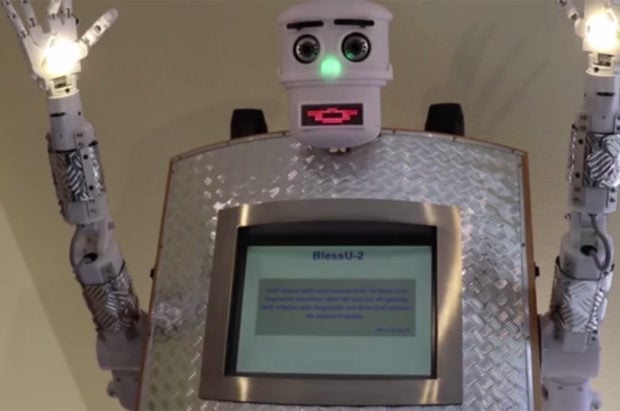 This robo-priest is called BlessU-2. I didn’t sneeze, but thank you. The robot comes from the Protestant Church in Hesse and Nassau and wants to challenge churchgoers thoughts about spirituality and technology. This robot recites Bible verses, gives blessings to parishioners in five different languages and can beam light from its hands, which is really creepy.

I’m not sure, but I think I might become a member of its robo-cult, having just been indoctrinated by watching the video. I know for a fact that this robot would blab everything you told it in the confessional too. You know how Target and Chipotle lose customer information to hacks? Just like that, except instead of your credit card number, everyone knows how often you pleasured yourself, and that you accidentally ran over your kid’s favorite pet last week.

Is that the religious future you want? You could go to hell just by not reading it’s terms of service.