You Need These LEGO Accessories For Your Nintendo Switch

Nintendo’s upcoming Labo accessories for the Switch should be a hit with fans since they’ll introduces some unique gameplay mechanisms. The problem is that at $70 to $80 per kit, they’re pricey. That’s a lot to pay for cardboard. But you could build your own similar accessories using LEGO pieces. 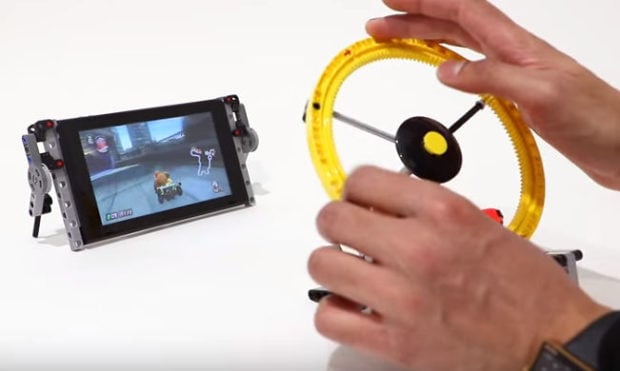 That’s exactly what Vimal Patel did. He created a short video showing off a few useful Nintendo Switch hacks using LEGO Technic pieces. He made an improved kickstand, a better approach to mounting the Switch’s Joy-Cons, and a pair of steering wheels that look like they work great for Mario Kart 8 Deluxe.

There’s one caveat to these builds, however. They use one LEGO piece that you probably don’t have, and can’t buy in stores. This 3D-printed adapter connects to the side rails the Switch’s Joy-Cons, allowing LEGO pieces to be attached to the console. Keep in mind that you also have to modify your Switch adapters to make them LEGO Technic-friendly too.

Also, you don’t get the Labo software so maybe you do want to spend the $70 after all. Then again, LEGO is much cooler than cardboard. If you have the time and money, this is a cool way to interact with your Switch.