It’s been a long wait for fans, but Red Dead Redemption 2 is finally the way. Pre-order bonuses and various editions of the game will be available when the game launches this October, but right now our attention is squarely focused on this Collector’s Box that gives you various a bunch of limited-edition goodies. 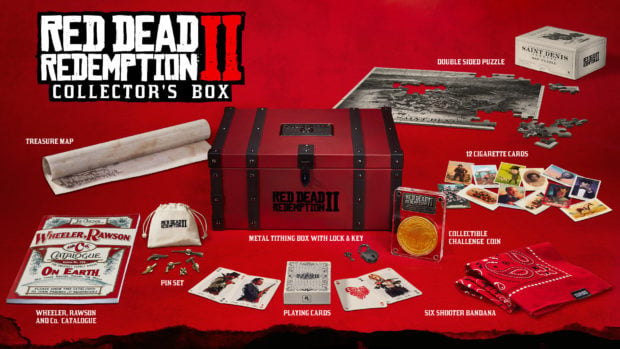 Buyers of the RDR2 Collector’s Box will get a Metal Tithing Box with Lock and Key, inspired by the lockbox used by the Van der Linde gang to stash contributions to the camp’s upkeep. It has black metal band detailing and an engraved Cornwall Freight and Commodities plaque on top. There’s also an oversize golden collectable Challenge Coin with an American buffalo on one side and a landscape on the other. The coin comes in a magnetic presentation holder with a black, engraved plaque describing the history of the endangered species.

Next up is a double-sided puzzle if you like putting puzzles together. It is a 100-piece wooden jigsaw puzzle with a view of the port of Saint Denis on one side and a Rockstar Games logo on the reverse. Aside from that, you get a bandana, a treasure map and a pin set that represents weapons from the game.

Still not enough? How about some playing cards a catalog and cigarette cards. Funny thing is, the Collector’s Box does NOT come with the game, and you’ll still need to buy that separately. How hard would it have been for them to throw a download code or a game disc in the box?