Dark Souls fans who have a Nintendo Switch have been waiting for a port of this classic game for a long time, and finally it’s nearly here. After being delayed from its initial May release, now have a real date for Dark Souls: Remastered on the Switch, which will arrive on October 19th, along with a companion amiibo figure. 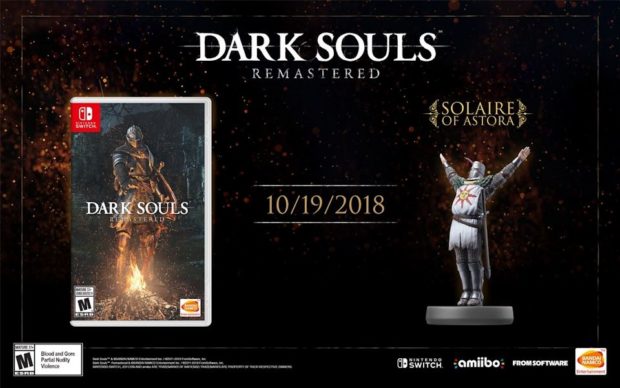 This is great news because as of now Nintendo Switch users don’t have a game in which you die every 2 minutes. Really, this game should have arrived by now, but sometimes these delays happen. It could be due to the developer just wanting to make the game better, or bug fixes that take a while, etc. In this case, it likely took longer than expected to adapt the game to the Switch’s controls, since this is a very difficult game with some complex control issues. The PS4, PC and Xbox remastered version all launched as scheduled back in May after all.

Anyway, your time is almost here Switch users. The Nintendo version has 1080p resolution when docked in TV mode and 720p when you are playing the handheld version. The frame rate is clocked at 30 fps, and the game will support 1 to 6 players in online mode. Also, DLC will be included in this remaster. Have fun, Switch fans. This is a great game, even if you will die 10,000 times playing it.