You know those guys who can make anything into a knife? Plastic, paper, butter, whatever? Well, YouTuber Kiwami Japan is the mad leader of these geniuses. One of his more recent creations involved turning underwear into a kitchen knife. You wouldn’t think that this was possible, but in his hands it is. 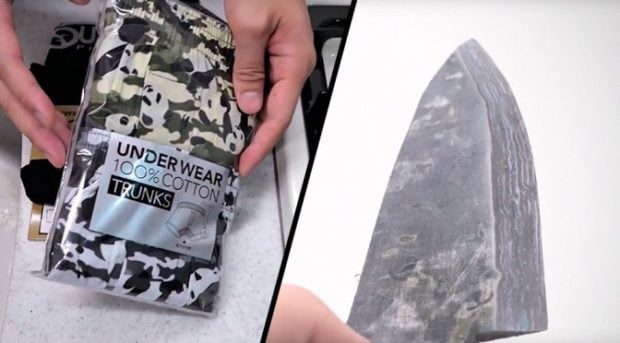 So behold, a functional kitchen knife made out of 100 percent cotton underwear and briefs of 92 percent nylon and 8 percent polyurethane. He had to iron together several layers of the fabric to form a solid object. Then he put it through a series of sharpening processes to bring it up to slicing perfection. He then put his razor-sharp drawers to the test by slicing up several items.

This underwear slices and dices meat, paper, and a cucumber. This is crazy. It makes you wonder what else can be turned into a knife. I guess it won’t be long until serial killers start making knives like this, then we can have names on the news like, “Underwear Knife Killer” or “Wait Till He Gets His Hanes on You Johnson.” We are living in strange times, people. Very bizarre times. Please don’t kill anyone with underwear, people… in knife form or otherwise.