A guy recently built his daughter a sweet winter sled, powered by two leaf blowers. It was made by a very cool dad from Belgorod, Russia, and he is clearly winning at the parenting game. 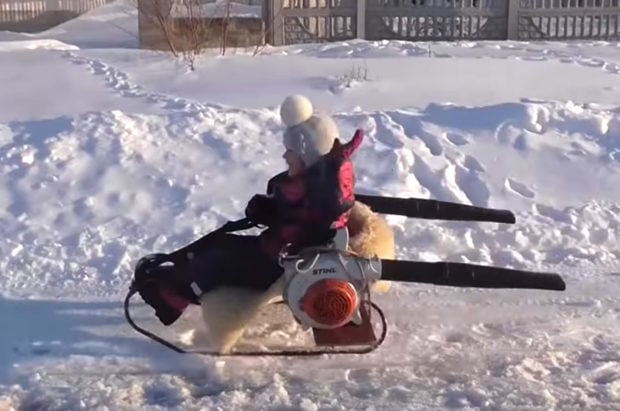 The video below is only about 18 seconds long, but that’s long enough to show off this crazy creation as it propels the kid through the snow chasing an adult. It looks like this sled gets up to a decent speed too, but not fast enough for me. I would add at least three more industrial-strength leaf blowers. And put a plow on the front too. There’s no reason that kid can’t be plowing the driveway while she’s having all of that fun. And give those blowers some sway so she can make turns. But otherwise, it’s pretty damn cool.

I saw someone in the comments section saying “It blows!” Whatever man. Why don’t you make like a tree and leaf!

Man, these kids today have way cooler dads than we had when I was a kid. Back then our dads were all like “Do your homework” and stuff. Now fathers all over the world are building cool stuff for their kids. I want a dad like this guy.