Inventor and madman Colin Furze has built some pretty wild stuff over the years. Among my favorites are his Star Wars-inspired projects, which so far have included a giant AT-ACT playhouse and a full-size TIE Silencer ships. I can only imagine what Colin’s neighbors must think of him.

Furze has yet again teamed up with eBay UK to sponsor a Star Wars build, this time replicating Luke’s X-34 landspeeder from A New Hope. 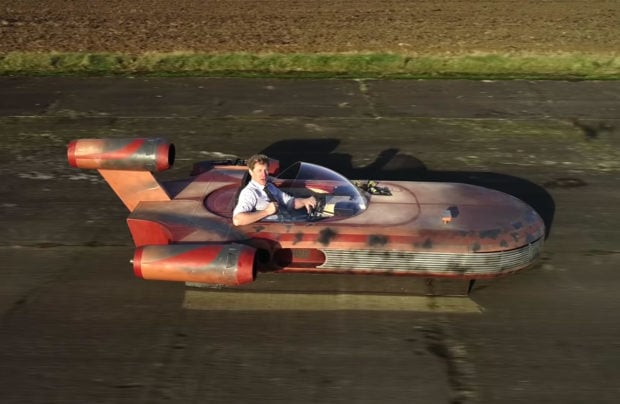 What’s really amazing about the project is that it’s not only quite accurate to the version seen on screen, but that it actually can drive. Furze started off with a standard golf cart he found on the auction website, and proceeded to rip it apart, leaving just the chassis, suspension and steering.

He then crafted a beautiful bent metal body for the vehicle then painted it up to look like it did on screen. Initially, he upgraded the cart’s electric motor for motivation, but that wasn’t enough for Furze, so he later added some jet engines to give it a little extra oomph.

You can check out the finished landspeeder build in the video clip below:

While the jets add an awesome look and sound effects to the vehicle, they actually don’t make it go that fast, so Furze thinks that at some point he might put in a more powerful electric motor, or possibly put a good, old-fashioned internal combustion engine. Regardless of how fast it goes, it’s still an amazing build.