The Weirdest and Worst Star Trek Toys Ever

Despite getting its start back in 1966, Star Trek continues to entertain, with new series like Star Trek: Discovery, Picard, and Lower Decks, all actively in production. Over the years, the franchise has certainly evolved, though in general, sticking to a formula that blends social commentary, science fiction, adventure, and humor. While there have certainly been hits and misses for Star Trek, the same could be said for its collectibles and toys. That said, I thought it might be fun to catalog a few of the strangest and worst Star Trek toys made over the decades.

First up is the Official Star Trek Helmet, a ridiculous toy that looks nothing like anything worn by anyone in Starfleet. With its open face, this helmet certainly wouldn’t help you breathe on a spacewalk, so I can only imagine it was supposed to be used at pressurized locations – possibly at a Starfleet construction site or something. The flashing red light and “pulsing sonic sound” it emits are sure to scare off a Gorn, and the stick-on name lettering ensures that Kirk and Spock won’t accidentally take the wrong helmet from the locker room. 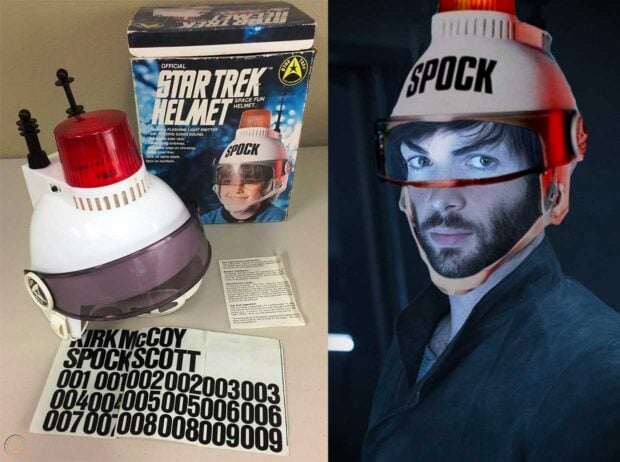 Next, we have the Star Trek Sky Diving Parachutist – which features non-poseable figures of both Spock and Kirk, each attached to a plastic parachute. Yeah, because that happened so many times in an episode, where someone on the crew of the Enterprise walked out onto the saucer and took a flying leap down to the planet below. So much better than a transporter. 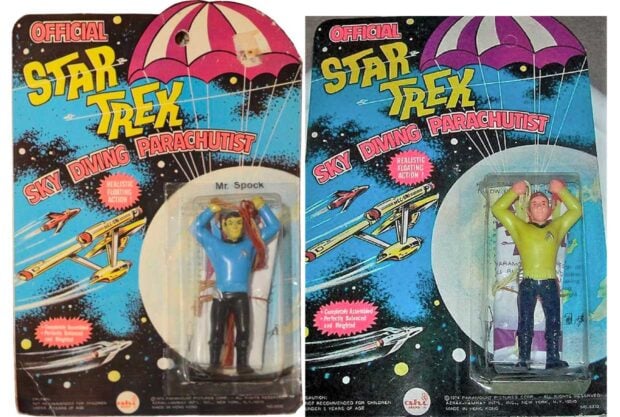 Another terrible Star Trek toy is this water gun that was shaped like the original U.S.S. Enterprise. While they at least got the general shape of the Starship right, it’s still completely nonsensical, firing water instead of a force field out of its deflector dish. Now, if your friends had a Klingon Bird of Prey water gun, it might be a different story. 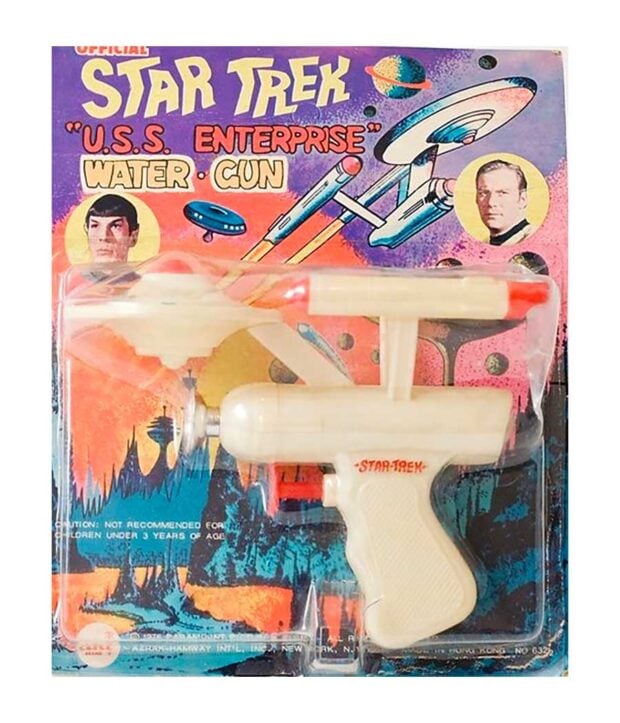 Dating back to the earliest days of Trek, the Star Trek Rapid-Fire Tracer Gun looks like the lovechild of a prop from a 1940s gangster movie and a ray gun from Flash Gordon. This thing looked nothing like a phaser, but at least its little disc-shaped projectiles were fun to shoot at things… until your little brother tried to eat them or stick them up a nostril. 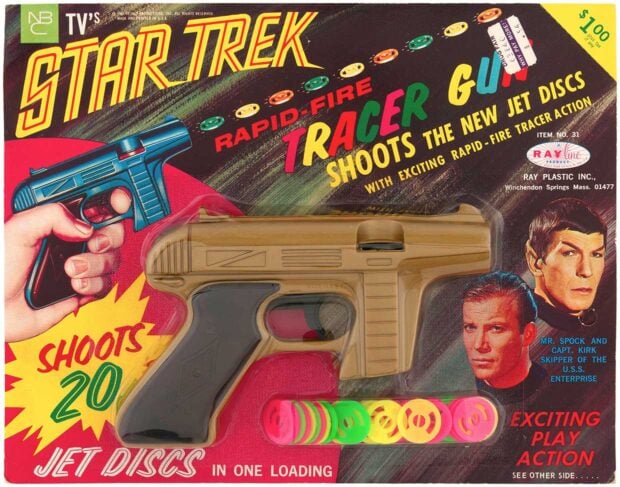 The Star Trek Metal Detection Probe was another shameless cash grab. Basically, it was just like any other cheap metal detector, but with a Starfleet logo slapped onto it, and a sealed detector loop that just happened to pass a slight resemblance to the saucer of the U.S.S. Enterprise. The least it could do is detect dilithium crystals, but nope, just steel pop-tops and other random metal junk dropped onto the beach. 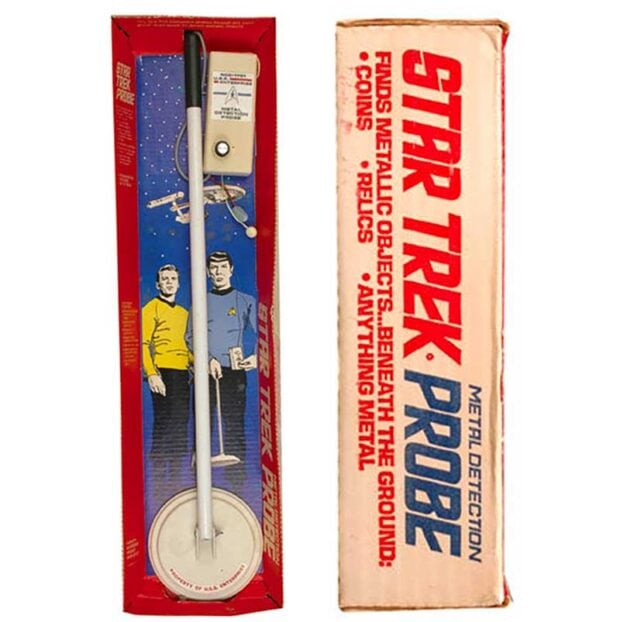 Not every weird Star Trek toy came out in the ’60s or ’70s. Lionel trains are guilty of this with a product you can buy right now. What you’re looking at here is the Star Trek Lionchief Train Set. This set of large O-gauge trains includes a U.S.S. Enterprise “diesel” locomotive, and boxcars inspired by 10 Forward, the Holodeck, and Sick Bay, all based on their appearance in The Next Generation – if NCC-1701-D was Snowpiercer. They also make Captain Picard, Captain Kirk, and Tribble Transport boxcars, and a tanker filled with Romulan Ale. I kid you not. 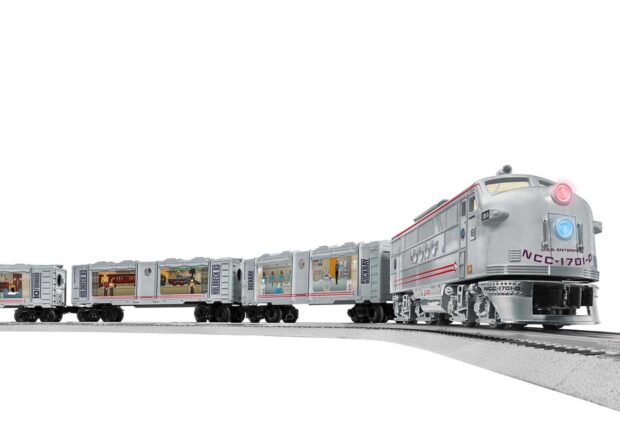 Not to be confused with Lionel’s trains, the Star Trek Climb-Action Traction Mighty Mike Astro-Train Gift Set is even further off the mark. It’s like the guys who made this thing thought they could make up for its crappiness by adding more words to its name. This awful thing has zero resemblance to anything in Star Trek and includes such out of place items as a spinning disk launcher and a robot carrier trailer. Plus, they call it a train, and it doesn’t even run on tracks. 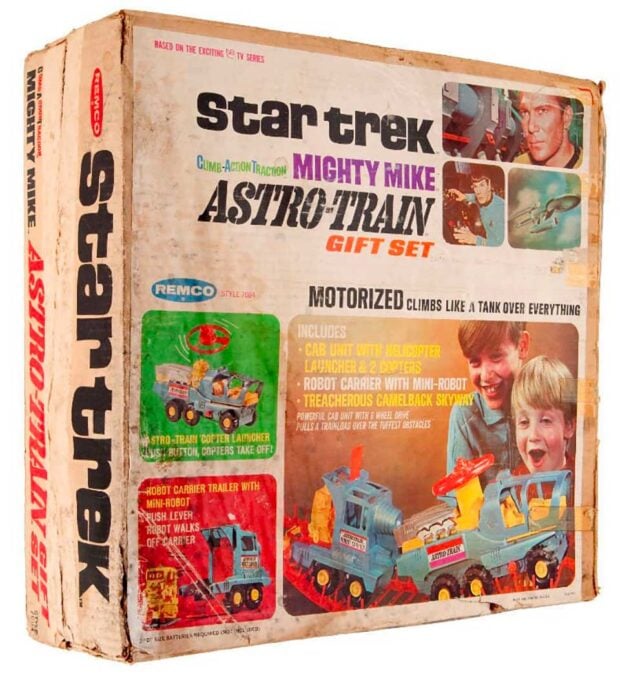 So you’re approaching an unexplored planet and want to search for signs of life. Why bother using the long-range sensors aboard your Starship, when you can transport down to the surface and survey the area with a set of low-powered, plastic Star Trek binoculars? They’re the only binoculars Spock trusts. I saw that on the package, so it must be true. 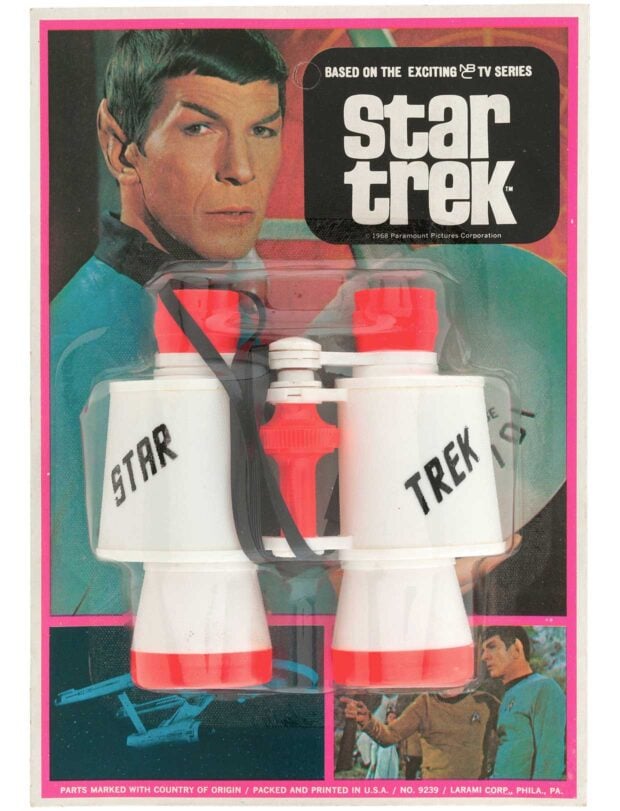 I started this off with a Star Trek helmet, and I’m ending it with an even worse Star Trek helmet. The bubbly yellow Star Trek Astro-Helmet looks like one of the ghosts from Pac-Man decided to park it on top of a kid’s head and suck out his brains. Either that or Dumb Donald from the Fat Albert Show traveled into the future and got himself a new hat. At least it has non-shattering lenses and a chin protector because the other kids would have beat the stuffing out of you if you wore this to school. 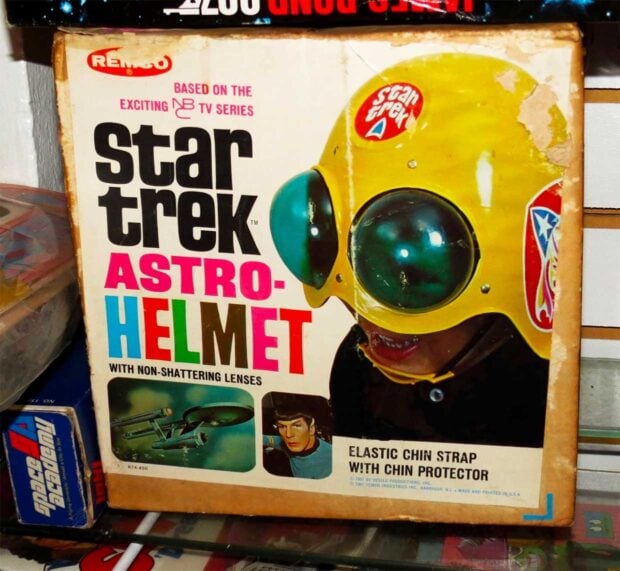