Going green is all fine and good for the environment and it will help you a bit when it comes time to pay those utility bills too. I have tried some of the green florescent bulbs in my normal light fixtures before, but the weird colored light bothered me so I tossed them out. I like the idea of LED lighting since the light color can be adjusted, but there are few LED bulbs on the market and those aren’t that bright. 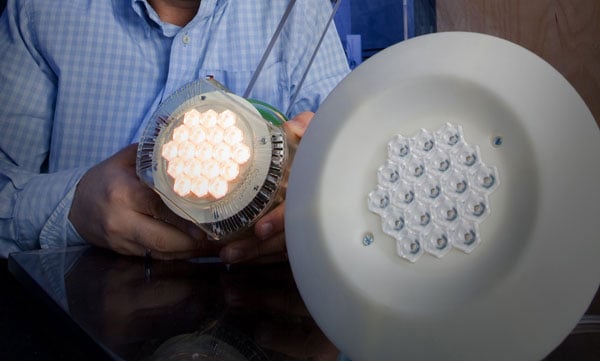 Researchers at GE have revealed a new LED light bulb prototype that has 1500 lumens of light output, which is equivalent to a 100W halogen bulb. The LED bulb has to deal with lots of heat and to keep the thing cool and small the researchers used from tech that GE developed for jet engines to cool the bulb.

The tech uses tiny micro-fluidic bellows type devices that provide high-velocity jets of air that hit the LED heat sink. Those jets of air help to cool the heart sink ten times more efficiently than without them. That allows the light to be brighter, with fewer LEDs and saves money.