What happens when you rip the guts out of a four-slice toaster, and replace them with the innards of an Xbox 360? Well, it stops making english muffins, but it does play CoD: Black Ops now. 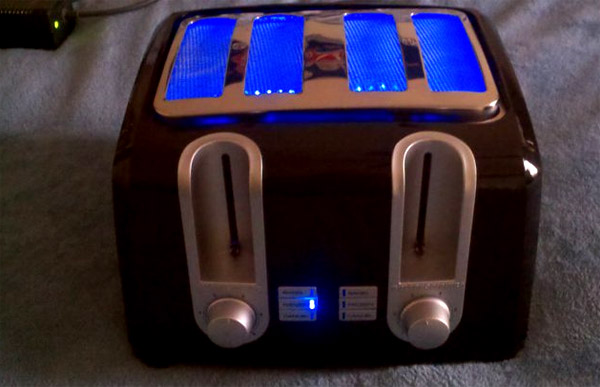 Modder ncaruso11, aka (akatheguy2) gutted his toaster and turned it into the epic XToaster360. Sure, it’s a little more bulky than a stock Slim 360, but on the other hand, it looks way better in the kitchen than any other Xbox 360 I’ve seen. Check out a couple of clips of the XToaster360 in action below:

I’m not quite sure why in the first video, the drive tray opens by touching something on the left side under the toast plunger, and in the second clip, he presses the toast darkness knob on the right. If I had my drothers, you’d actually eject the disk by pressing that toast cancel button that’s on most modern toasters, and the DVD would go flying out of one of the toast slots.

Alongside his video posts, the modder says “If I can sell this one then there are sure to be bigger and better ones in the future. Feel free to throw out any ideas.” [Technabob Raises Hand] Keep two of the toast slots open so I can toast a bagel during my next multiplayer marathon Halo:Reach session. I’m pretty sure the 360 throws off enough heat to do that without having to keep the heating elements.