Is it possible to wirelessly transmit a video signal to any screen?  That’s what YouTube user BITcrash 44 claims to have done. Supposedly he has an invented a pair of devices that are able to send video – not a live one though – from an iPhone 4 to any screen. There’s a transmitter that attaches to the audio jack of the iPhone 4 – this alone makes most people scream fake – and then there’s what he calls a video repeater, which is the one he’s holding next to the screen he wants to hijack. 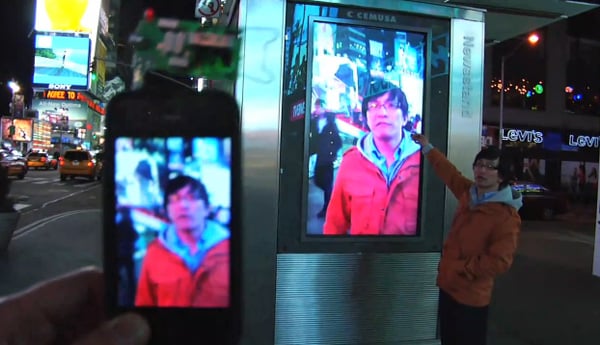 Here’s his demo of the supposed hack in Times Square, which is littered with screens for him to mess with:

BITCrash 44 didn’t mention if the iPhone 4 he’s using has been modified in any way, although he promises to post another video later this week where he’ll explain how he made the prototype. Seems too good to be true, but you have to admit it was fun to watch.