Whether you just want to be seen while you’re riding your bike at night, or need to read a book while you’re camping, this cool illuminated gadget could be just what you need. 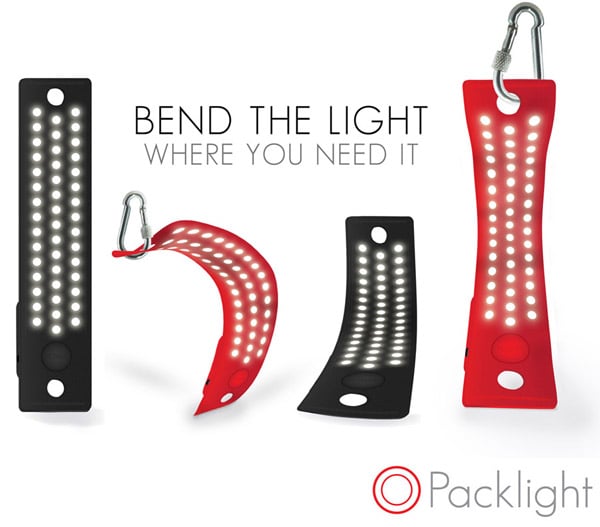 The 45 LED Packlight is exactly what it says – it’s a 1cm-thick strip loaded with 45 bright LEDs which can provide flexible illumination wherever you go. Thanks to integral shaping wires, it can be bent into just about any shape. The Packlight has an integrated USB-rechargeable battery, and not only will hang from your bag with a carabiner, but has built-in magnets so you can stick it on a metal surface too. In addition to a super-bright 45 LED mode, you’ll be able to drop down to 15 LEDs when you don’t need so much light, or a blinking mode for emergencies.

Designed by Chadwick Parker and Joe Huang, the 45 LED Packlight is currently in the fundraising stage over on Kickstarter, but is just a stone’s throw away from achieving their initial $7,000 raise to get the first batch into production. A contribution of $45 (USD) or more will get you one.

While it is similar to the already available Striker FLEXiT, the Packlight offers significantly more LEDs, greater surface area, and rechargeable batteries.