Here’s another mod that makes me wish I had a decent gaming PC. Admittedly I discovered this a bit late, but it’s just too silly not to share. YouTuber darthgir2 rounded up some of the Pokémon and dropped them into the post-apocalyptic world of Fallout. The results are equally hilarious and creepy. 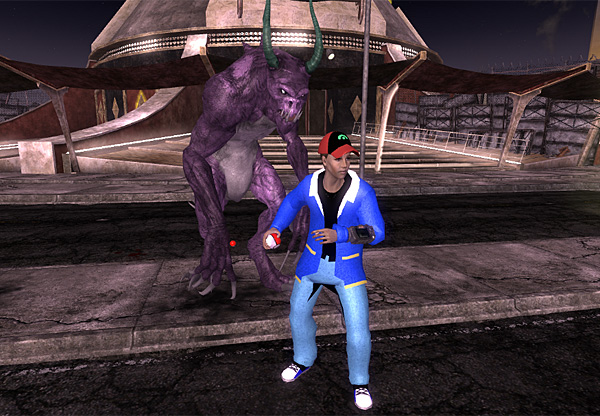 I don’t even know what that thing is behind vault dweller Ash. The Pokémon are still encased in Pokéballs, which are placed in shrines scattered throughout the game world. When summoned, the monsters will follow you around as companions and absolutely demolish anyone that stands in your way. To add to the gruesomeness of it all, if you want to put a Pokémon back into its Pokéball you’ll have to kill it. That’s sad, but necessary. The NPCs will probably faint or puke or just go insane at the sight of these monsters.

That freakin’ Machoke is going to give me nightmares. You can download the mod for free at New Vegas Nexus; the instructions are there as well. There are 10 Pokémon in the mod – Arcanine, Beedrill, Charmeleon, Ditto, Hitmonchan, Kabutops, Kangaskhan, Machoke, Nidoking and Scyther. Unfortunately, it looks like your New Vegas Pokédex will remain incomplete, because darthgir2 has said that he’s not planning on updating the mod anytime soon. Don’t have New Vegas? The mod also has a Fallout 3 version.