Google’s Maps service is a wonderful evolution of the ever useful map. But sometimes street names and building numbers are still not enough cues for directions. I’m sure you’ve mentioned a nearby building or store as a landmark when you’re giving or asking for directions, simply because a building is easier to spot than a street sign. That’s… part of the idea behind CityMaps. 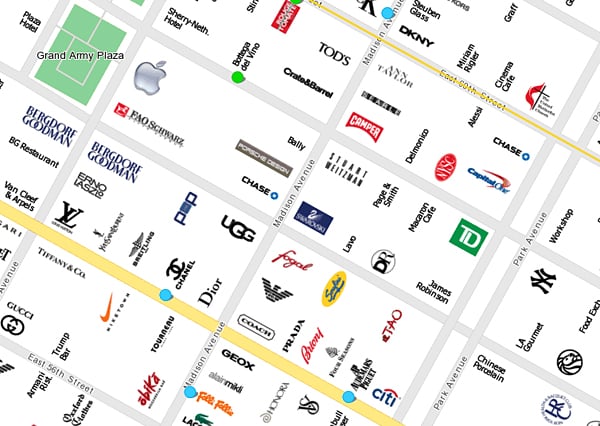 CityMaps still retains the names of streets, but instead of satellite pictures or building outlines, it shows you the logos or names of the establishments in the area. Aside from providing easy to spot landmarks, CityMaps also makes it easy to find or discover stores, restaurants and other places. Obviously the other motivation for CityMaps is to coordinate with businesses who want their buildings to be more visible.

CityMaps currently only has maps of New York, Austin and San Francisco, but obviously they’re going to cover more and more cities if they progress. It also has a free iOS app that you can try out. Here’s a free thousand dollar idea: HipsterCityMaps – maps that only point out the obscure stuff. Also bike routes.