Bladepad iPhone 4S Gamepad Comes With a Case, Doesn’t Come With a Game

Despite the millions of dollars of profits that it’s raking in, Apple still hasn’t come up with a way to include native support for physical controllers in iOS games. The best that we can hope for is for a gamepad manufacturer to step up and get support from developers. I really hope Bladepad does that. 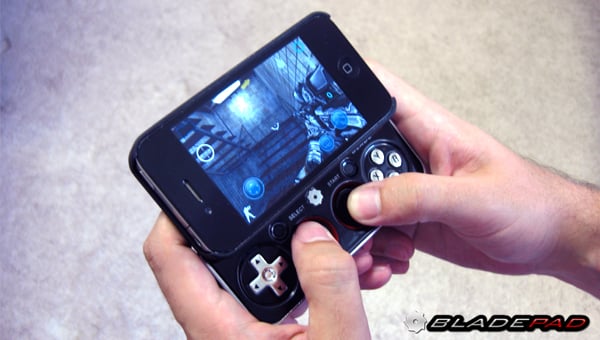 The Bladepad is a Bluetooth 4.0 gamepad that comes with all the buttons and sticks present in a modern console controller: a D-pad, two analog sticks, four face buttons, four shoulder buttons and even a select and start button. It comes with a case, but you can detach the Bladepad itself if you choose. It even comes with a charger that can simultaneously juice up the controller and the iOS device that it’s attached to.

Now for the bad news. Because it uses Bluetooth 4.0, the Bladepad is only compatible with the iPhone 4S and the new iPad. Worse, as of this writing the controller is confirmed to work with – drum roll please – only one game.  The makers of the controller did say that they’re working with “several major game studios and many independent studios as well.” I really like how the Bladepad looks and fits, so I hope it gets widespread support from developers.

A pledge of at least $59 (USD) on Kickstarter gets you a Bladepad, but if you ask me I think you should pledge less than that. You might be stuck with a beautiful controller that has no games to control.