We saw the dark side of 3D printing with the 3D printed semi-automatic rifle. Here’s a counter-example of the technology’s vast potential: a lightweight assistive device that might not have been made if not for 3d printing. 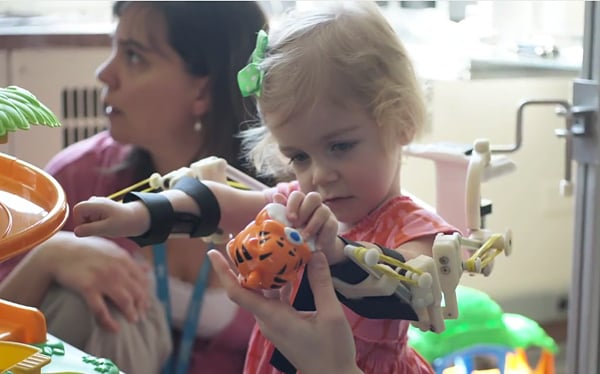 Two-year old Emma Lavelle has arthrogryposis multiplex congenita – more commonly referred to as AMC or arthrohryposis – a condition wherein multiple joints in the body are fixed, limiting one’s movement. In Emma’s case she could barely move her arms and legs. But now she’s able to move her arms, thanks to a 3D-printed version of the Wilmingtong Robotic Exoskeleton or WREX. Emma can only wear the 3D-printed version because it’s made of ABS plastic, which makes for a device that’s significantly lighter than the default WREX that was made of metal.

My eyes just printed water. Check out Stratasys’ website for the full story. You can also read more about the WREX at Nemours’ website.