I’ve always liked using the clock applications on my smartphone. You never really think about the design of the clock faces, but apparently they can be copyrighted works. Recently, Apple was sued for copying the Swiss Federal Railway’s clock design in iOS. 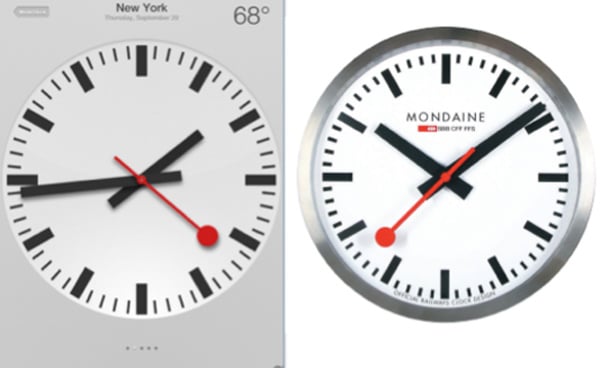 Apple will pay the Swiss Federal Railway $21 million for using their clock design in iOS without their permission. It’s fairly obvious to even the untrained eye that the clocks are almost identical. The initial iconic design was created in 1944 by Hans Hilfiker, an employee of the Swiss company. It has been in place in Swiss train stations ever since and has been honored by the Museum of Modern Art (New York) and London Design Museum (London).

Mondaine, a Swiss watch manufacturer, currently owns the rights to the analog clock and watch design. Now, since Apple paid the railway, they also have the rights, albeit digital ones.

[via C|Net via DVice]