Oreo Separation Gun Separates the Cream from the Cookies, Sorta.

We’ve been having fun with the viral marketing campaign that Nabisco has going right now and have seen all kinds of ways to separate the Oreo cream from its cookies. But the one thing we haven’t seen is a gun that can accomplish this important first-world task. Well, get ready to see the Oreo-separating shotgun. 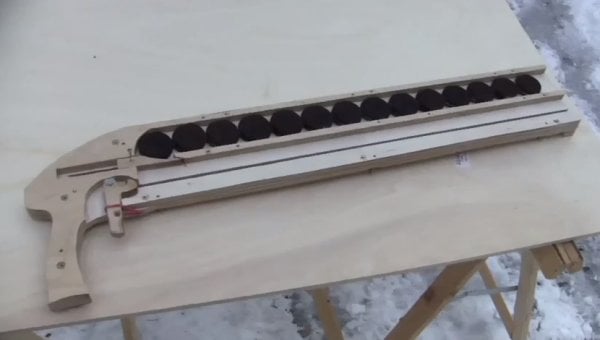 This creation comes from Joerg Sprave who you will know from The Slingshot Channel on Youtube. He knows his stuff when it comes to weapon building, and has built an impressive gun to separate the Oreo cookies from the cream. A pump-action Oreo shooter. Just load some Oreos in the top and they fire from the bottom muzzle section.

This weapon hold 14 Oreo cookies. Just pull the slide to load one in the chamber, then pump it and unleash one of its delicious cookie bullets. So how does the gun separate the cream from the cookie? Okay, it doesn’t really. Well, it kind of does. When cookies hit an object, like a wall, it all splatters nicely and is separated. Just not in a way that is neat and edible. Joerg also tried to put a box-cutter blade inside the barrel to see if it would split the cookie neatly, but all he ended up with was a bunch of crumbs. Still, the idea of a gun that fires cookies is loads of fun.