Remember Motorola’s Atrix and Photon 4G? They were phones that could be plugged into a proprietary dock that turned them into Linux netbooks. If you ever wished you had something like that for your phone, check out the Casetop. 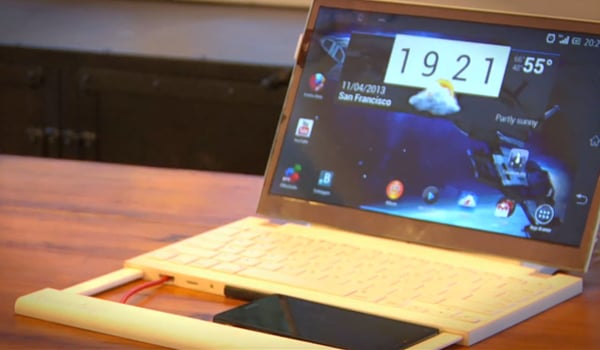 The Casetop doesn’t give you a desktop OS but it does add three useful things to your phone: a full-sized keyboard, an 11.1″ 720p LEd-backlit screen (not a touchscreen) and a battery. That’s right – the Casetop has its own battery, and if you plug your phone in via a USB cable the Casetop will charge your phone. The Casetop works with any smartphone that has Bluetooth connectivity (to connect to the keyboard) and a video output via HDMI, MHL or micro-USB (to connect to the screen). It also has a couple of 1W speakers, but you’d probably be better off plugging in a pair of headphones via the 3.5mm connector. Here’s a brief demo of the prototype Casetop:

It’s kinda weird having to navigate via your phone’s touchscreen, but aside from that I think this device could find its niche. Pledge at least $250 (USD) on Kickstarter to get a Casetop as a reward.