Xbox One Laptop: The VCR Slims Down

Okay, okay, I kid. The Xbox One doesn’t look that much like a VCR, but it still is about a big as one. But leave it to an enterprising console modder like James “DarkUncle” Terry to solve that problem, by transforming an Xbox One into a laptop. 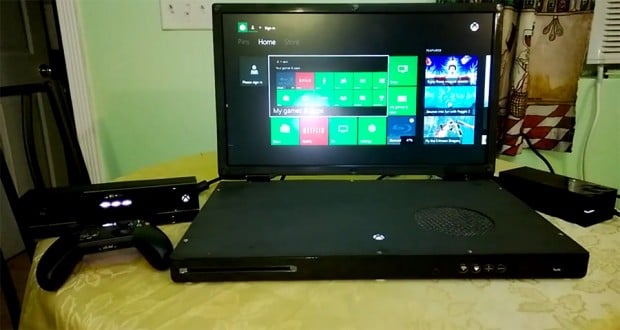 What you’re looking at here is what I’m reasonably certain is the very first Xbox One laptop mod. The Console measures only two-inches-thick when closed, and that includes the size of the LCD flat panel built into its lid. That’s even more impressive when you realize that the Xbox One normally measures almost three inches-thick. The top of the console has a matte black finish, with an integrated touch power control and a gloss black shell around the outside. He also added custom buttons for controller sync, eject, and audio volume. Between its additional cooling fans and the standard Xbox One heatsink, James says it stays nice and cool too.

The laptop has all of the regular ports from an Xbox One, but also added an audio line-out connector, which Microsoft neglected to include on the console. Check out the build in the video below:

Great job, James! Now all you need to do is figure out a way to build the Kinect into it, and shrink down Microsoft’s power brick, and all will be right with the world.

If you’re interested in having your own custom Xbox One laptop built, head on over to Dark Uncle Custom Gaming to get in touch with James.