The open source humanoid robot DARwin-OP is a tinkerer’s dream, but at $12,000 (USD) it’s going to remain just that for many. Fortunately Robotis released a more affordable version of the robot. The DARwin-Mini may be smaller and less powerful than its bigger – and OP! – brother, but it’s just as customizable. 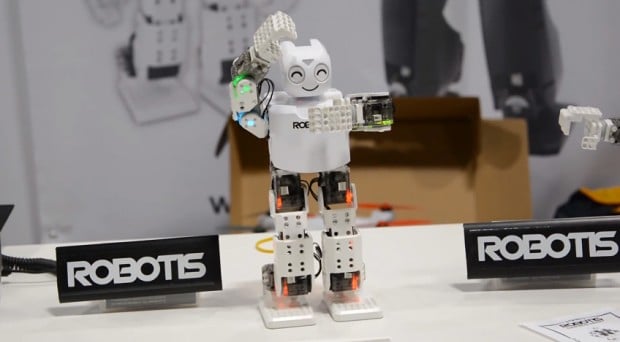 DARwin-Mini has a custom controller based on the 32-bit ARM Cortex M3. Just like the DARwin-OP, DARwin-Mini’s software is open source. You can also program it using Robotis’ RoboPlus software; just have a Bluetooth module on your computer so you can connect to the robot. Thingiverse member Michael Overstreet will also upload 3D files of the robot’s parts, making it more customizable. Currently, the robot’s user-friendly app is only available for Android, but Maker Shed says an iPhone app is also in the works. The app lets you control DARwin-Mini through touch, gesture and voice commands.

You want more? MBCentertainment also shared a video of the DARwin-OP and the DARwin-Mini featured on a Korean variety show. A group of DARwin-Minis dance to PSY’s viral hit at around 2:36: