Athens, Georgia-based Terrapin Beer Co. has teamed up with the creators of The Walking Dead to create an official beer. It is described as a “bloodthirsty Red IPA made with blood orange peel and a horrific amount of hops.” 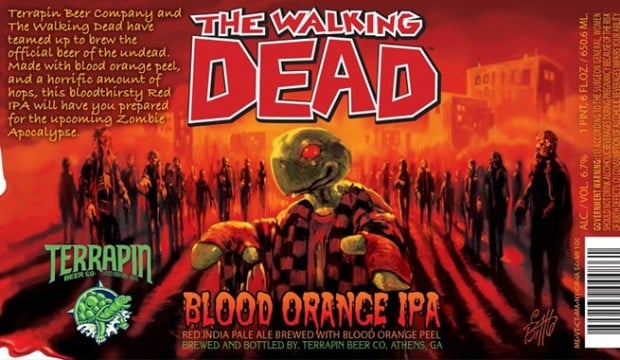 Interestingly, the beer’s logo matches The Walking Dead comic books and not the TV series. You’ve seen Terrapin Beer on the show itself. It has been featured along with several other craft breweries, in the form of labeled boxes in abandoned shops and bars.

The beer will be available in 22 oz. bottles or on draft. We don’t have an official release date for the 6.7% Alcohol per Volume beer, but I think it might coincide with the latest spin-off, The Walking Drunk. Nah. I kid.