Well, here’s something that you don’t see every day. Apparently, rather than just kill this Xenomorph and take a trophy, this Predator decided to humiliate his kill and turn it into a kickass motorcycle. Now it will always be his slave on the open road. 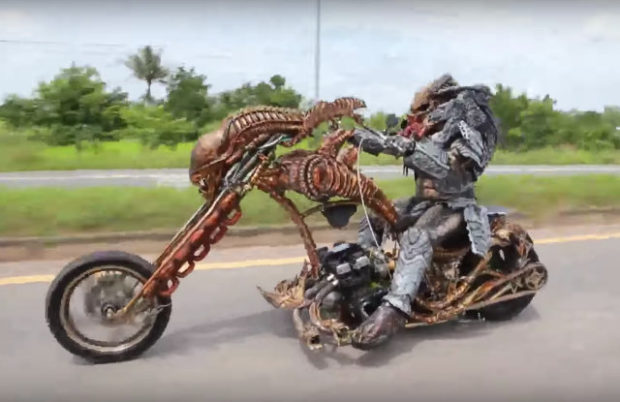 Now that’s not really a Predator, but it’s a cosplayer from Thailand riding his awesome custom motorcycle. This person knows how to live. I’ll say that. It’s a great way to get the hell out quickly when you have to activate your nuclear bomb and kill Arnold Schwarzenegger.

Honestly, I wouldn’t even care if this was a scene from the new Predator movie. In fact, it makes me want a Predator motorcycle gang movie, with Predators riding across the country behaving badly. I envision it as a comedy. And it’s all good until they encounter the Xenomorph gang. Then it’s war. Until a brave woman named Ripley brings the two forces together and ushers in peace. Beautiful. I think it might win an Oscar.

Damn, that is a badass bike though. Okay, I’m out of here. I have to get started on this screenplay.