Disney is a family-friendly company. At least they try to be. They don’t tolerate people in Donald Duck costumes cursing at theme park visitors or trying to feel them up. Just like they don’t tolerate their movie directors making nasty “jokes” online. But the company isn’t afraid to get you good and drunk so that you part with your money more easily. That seems to be the plan for Disney’s upcoming Star Wars Cantina. 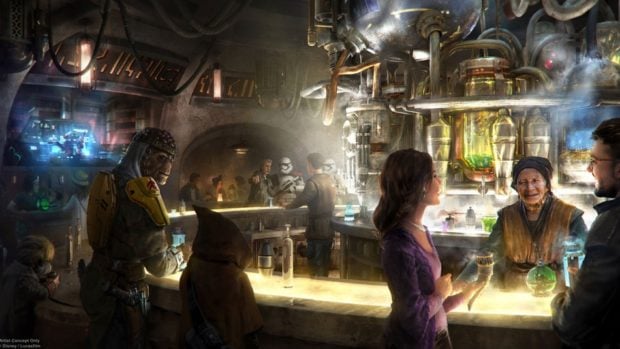 The Oga Cantina in their Star Wars: Edge of the Galaxy park expansion will serve alcoholic cocktails. It opens in 2019 in Disneyland and Disney World. Apparently, they’re going to serve non-alcoholic drinks for kids too. So feel free to take your child to a bar I guess. This is going to be way more overpriced than the movie cantina, but on the upside, it should a hive of scum and villainy with all of that booze flowing.

Disney World has been serving alcoholic drinks inside the park since 2012, so this is nothing new. They also had their failed Pleasure Island project which was getting adults drunk all the way back in 1989.

I hope they have that fat guy behind the bar, and nobody gets their arms chopped off by an old hermit with a lightsaber. Just don’t bring your droid. They don’t serve their kind.