Mike Warren wanted to dress up as Ghost Rider for Halloween this year. Now, he could have just worn a cheap mask and leather jacket, but he wanted to go the extra mile with a wearable glowing skull helmet surrounded in a cloud of smoke. When you are Ghost Rider, that’s just how it has to be. You can’t cheap out.

Mike used a very modern tool for generating the smoke: a simple vape.  Plus, the glowing LEDs inside the skull do a really great job of creating the look of fire, without the risk of burning yourself himself beyond all recognition.

Combined with the smoke really creates the illusion that this is the real Ghost Rider. The smoke comes from a store-bought electronic cigarette. Warren modded it with custom controls, a fan unit, and some flexible tubes to redirect the vapor flow. 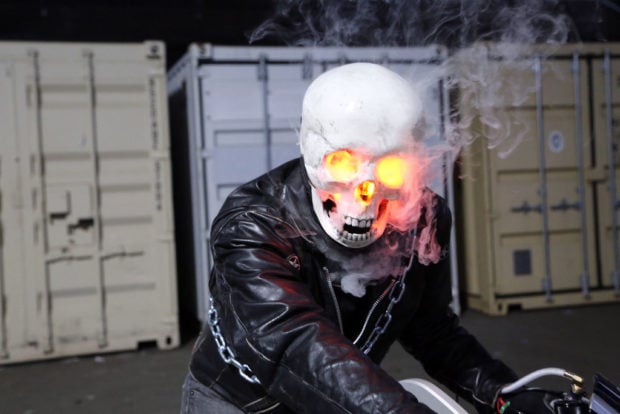 Warren documented the entire build on Instructables if you want to try making one yourself. That link has links to all of the parts and components he used, and the 3D skull model he modified and 3D printed.

This is one awesome Ghost Rider costume. Now all he needs is a flaming motorcycle to ride. Maybe he’ll make that next year.

[via Hackaday via io9]