Oh Geez. Turo Is Sharing a Rick and Morty Mortymobile

Do you love you some Rick and Morty? Well, you might get a chance to ride with Morty himself – or at least a giant version of the cartoon character slapped on the roof of an Mazda 3. The aptly-named Mortymobile will take to the streets courtesy of car-sharing service Turo and Adult Swim. 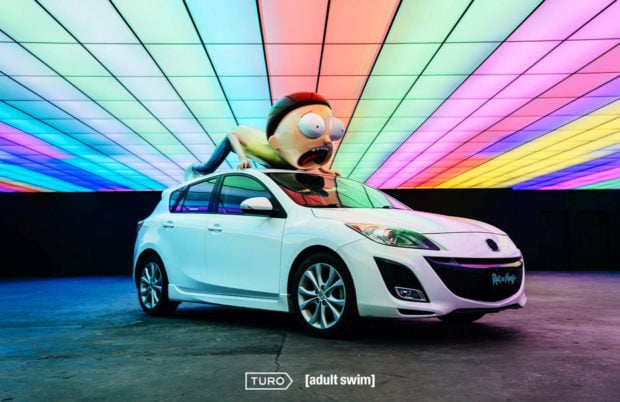 The 2010 Crystal White Pearl Mica Mazda 3 is pretty ordinary, other than the giant fiberglass Morty riding on its roof with a look of abject terror on his face. The car packs a 167 horsepower four-banger under the hood, and a whopping four-speaker audio system. Maybe if you open a portal to another dimension and drive through it, the car will become a Bentley or something. Or maybe some kind of blobby beast with 42 legs. Who knows?

If you’re interested in tooling around the multiverse with a Morty overhead, zoom zoom over to Turo starting this afternoon for your opportunity to book this weird and wild ride. Keep in mind that you’ll still be subject to Turo’s standard system of checks and balances, and must be 30-years or older to rent.