Thummer: This Synthesizer is All About Expression

If that 312-key keyboard I told you about recently was a little too complex for you to wrap your head around, here’s another electronic musical instrument that I came across, and this one only has 114 buttons. It’s called the Thummer, and its a portable synthesizer that’s capable of creating some really dynamic sounds, thanks to its unique input scheme. 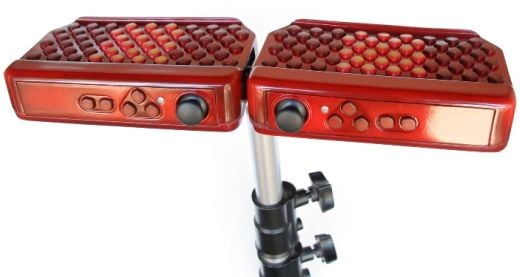 In addition to a set of keys set up on what looks like a modified variant of the Janko Keyboard, the Thummer offers thumb-controlled joysticks and buttons which are placed on the back of the device. The instrument can be played by placing it on a stand or tabletop, or can also be used as a handheld keyboard.

It’s designed to provide greater range of expression than other musical instruments by providing 7 degrees of freedom while playing. The thumb-operated joysticks let you adjust a variety of sonic attributes such as pitch, brightness and modulation. At the same time, each key on the keyboard is fully pressure sensitive, and can track the velocity and after-touch of each button pressed. From what I can tell, at least one of the prototype designs also includes motion sensor which can be programmed to influence your sounds too.

Thumtronics, the creator of the Thummer haven’t started selling a production model yet, and are looking for investors to make their dream a reality.