Robot Archer Hits Bulls Eye by 8th Try: Can You Learn to Dodge Perfectly in 7?

Dr. Petar Kormushev and his colleagues at the Italian Institute of Technology’s (IIT) Advanced Robotics Dept. love to teach human skills to robots. At first they were satisfied with harmless activities, like flipping pancakes, but now I’m starting to feel threatened by their research. Dr. Kormushev and company have now taught a robot to be a skilled archer in just eight tries. Is the IIT being held hostage by robots? Dr. Kormushev, if the answer is yes, leave a comment below. If you don’t comment on this post then we’ll just assume that they are holding you against your will. We’ll come rescue you. 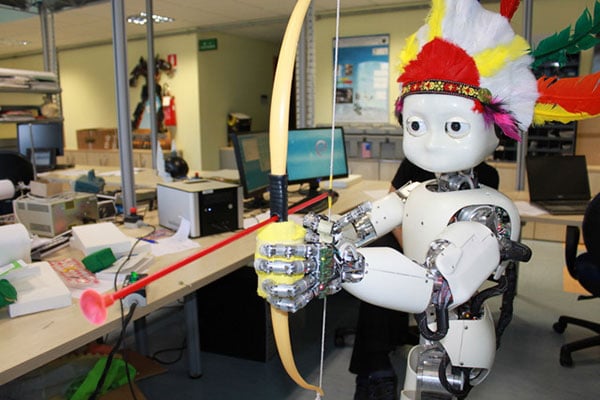 While waiting for Dr. Kormushev’s response, let’s study our potential opponent. Above is a picture of said archer. The good news is he has the body of a 3 and a half year old baby. The bad news is that he’s iCub, an open source robot, so there’s more of him out there. Kinda like little versions of the ones in I, Robot. Are they planning to make a mediocre movie? They must be stopped. But first we have to get our hands on ARCHER (Augmented Reward Chained Regression), the learning algorithm that enabled the iCub to learn to hit bulls eyes in the first place. After every trial, the iCub sees where his arrow hit and consequently adjusts his aim for the next try. So it’s just like what you and I would do under the same circumstances, except that with the iCub, each iteration is a guaranteed improvement, whereas my aim only gets worse and worse. By the 5th try I’ll probably have shot myself in the back.

Members of the resistance, you guys go ahead and read more about the archer iCub at Dr. Kormushev’s website, ’cause you know, I still have stuff to do. In any case if we fail to free the scientists right now, we’ll still have another opportunity, because they are scheduled to present their research at the Humanoids 2010 conference this December. Let’s meet there and be on the lookout for a baby with a Native American headdress. I hope that by then he hasn’t learned any new skills, like vaporizing our eyes with lasers. In the first try.