Wii Balance Board Used in Segway-Like Ride for Babies

As if babies weren’t troublesome enough, what with their crying and putting things-in-their-mouth abilities, a team of researchers from Ithaca College in New York have built a ride that even babies as young as 7 months can control, ensuring that parents of the future will literally get no rest. Seriously, though, the researchers are looking into ways to help babies that are disabled or have restricted mobility become more independent, and one of the prototypes they developed involves a Wii Balance Board. The gaming peripheral enabled a robot-turned-baby ride to detect if a baby was leaning towards a specific direction and thus moved accordingly. 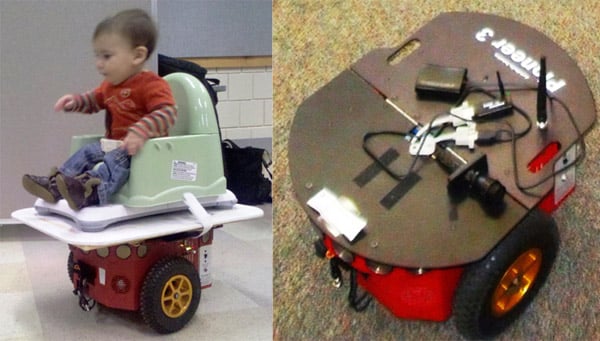 I love how the prototype looks – it’s stuff stacked on top of other stuff! The base of the robot chair is a Pioneer 3 robot, which is equipped with sonar sensors. The researchers used these sensors to make the robot detect whether a collision is imminent and override the baby’s butt’s input. The researchers also have a master override joystick that they can use to remotely control the chair. You can clearly see the Wii Balance Board below the plastic chair. A program was made so that the Pioneer 3 could use the input from the Balance Board’s sensors – a sustained lean would be taken as a sign that the baby wanted to move in that direction, so the robot would move accordingly.

The researchers were able to test the robot chair on babies 7 to 9 months old. The babies were coaxed to move the chair when they were offered a toy or food. But they also moved randomly, even when they weren’t being urged to do so. Oh babies. The researchers did admit however when they published their paper that they had not spent enough time to confirm if the babies realized that their input caused the robot to move. But I bet they do. I would so pay to see this thing in action.

[via Cornell Academia via NCPAD via PopSci]