Domino’s Japan Wants to Build First Pizza Restaurant on the Moon: In Other News, I Want a Million Dollars.

If the prophet Matt Groening is to be believed – and why the hell not –  in the future there will be an amusement park on the Moon. Also it will be ruled by the head of Al Gore. But the Japanese arm (tentacle?) of the popular pizza chain Domino’s also wants us to believe that they’ll have a branch on the moon and that they’ll be the first pizza chain to do so. They even have drawings to prove how serious they are! 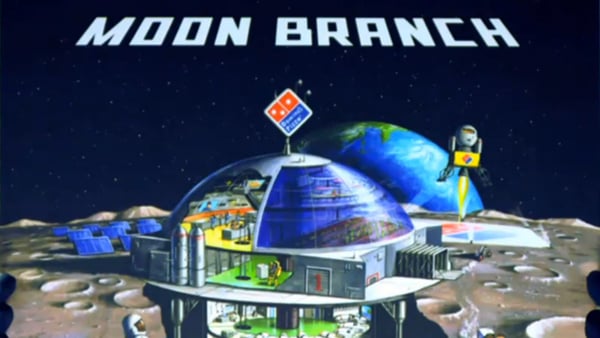 Apparently, Domino’s is trying to one-up their rival Pizza Hut, who in 2001 paid the Russian space agency to deliver a batch of their pepperoni pizzas to cosmonauts in space. Delivering pizzas to space is one thing. Building, running and maintaining a four story building on the moon is something else entirely. Why not shoot for Antarctica instead? At least you’re sure there are customers there willing to wrestle a polar bear for some hot pizza. Yet here’s the president of Domino’s Japan presenting their idea himself:

According to The Telegraph, a Japanese construction firm is “coming up with a plan”, which will involve sending 70 tons of material to space on 15 rockets, at an estimated cost of ¥1.67 trillion (~$21.70 billion USD). Here’s an awesome quote from a Domino’s Japan spokesman obtained by The Telegraph: “We started thinking about this project last year, although we have not yet determined when the restaurant might open.”

This just in: Technabob has announced that we will be the first blog to have a writer assigned to the sun. We will be discussing our plans with a very imaginative 6-year old, and we think we’ll need about 749 tons of stuff, which will be spent to space via the rockets that Domino’s will use to send their stuff to the moon, thereby reducing our cost estimates to about $5 trillion. We started thinking about this project just now, although we have not yet determined when the writer will be sent. We will be drawing straws to determine who gets the honor of representing our blog. In the meantime, you can check out Domino’s Japan’s website for their moon branch drawings.

[via The Telegraph via BornRich]