Last year we saw a prototype for an unwearable Pip-Boy 3000, which involved using a smartphone to create a replica that was functional, or at least interactive. This hack is not as high tech, because it only uses a digital picture frame, but at least it’s wearable. 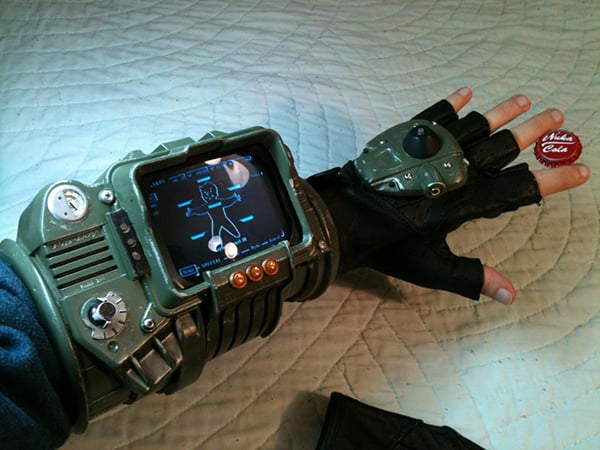 The replica was made by amateur prop maker and sculpture student Zachariah Perry as a gift for his brother. Awwww. As with the replica we saw last year, Zachariah also used the Pip-Boy alarm clock that was included in the Survival Edition of Fallout 3. Then he inserted the innards of a digital picture frame and covered it with the domed glass from a slide viewer, giving it a great retro look. He made three buttons to switch between the images being displayed on the frame, which are screenshots from the Pip-Boy 3000 of his brother’s Fallout save game. Double awwww. The knob at the lower left toggles the lights at the bottom of the display. Finally the separate, gizmo you see on the glove is an MP3 player, which he couldn’t fit inside the case of the alarm clock.

Now Zachariah’s brother is ready to leave their vault. Check out Zachariah’s blog for more pictures of the replica.