Mad scientist and all-around fun guy Colin Furze has created another crazy project. This powered micro scooter is a bit less dangerous than some of his previous builds, because he actually wanted to let his 5-year-old son ride on it. Even though he calls it “Jet Powered”, it actually doesn’t have a pulse jet or turbine engine on it. 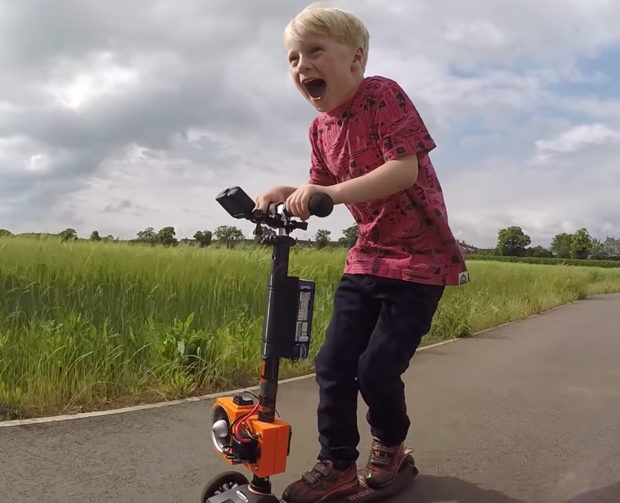 That would be crazy even for Colin. Hell, the kid would be shot into the air as soon as he stepped on this thing. Furze chose to go with an electric EDF (electric ducted fan). He threw in a few R/C essentials like an ESC, receiver and battery pack, some brackets and the Jet Powered Micro Scooter was born. Check out the build in the video below, or skip ahead to 6:10 to see it in action.

Since it’s remote-controlled, Colin was able to let his son take a ride while he controlled everything. With his son riding this scooter, it’s obviously not as insane as some of his past creations. You have to keep your kid safe after all. This scooter looks like a lot of fun. All I know is, it must be super cool to have a dad like Colin Furze.

I bet this kid grows up to follow in his dad’s footsteps.