There are very few scenes in cinema history that are as cool and unique as the opening sequence from Raiders of the Lost Ark. This, in a movie that is full of iconic scenes. In the 80s, kids everywhere were pretending that they were being chased by a boulder for years. Now, this amazing scene has been recreated in LEGO. 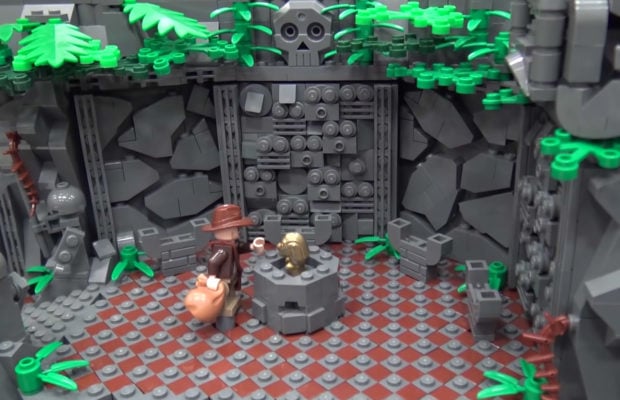 It was built by Caleb Watson and it is full of impressive detail. It has everything that the scene on screen had: The jungle outside, the plane, the sliding stone door, the swing over the pit, skeletons, the golden idol room and more. It’s everything that a LEGO/Indy fan could want in a LEGO set. Be sure to check out Beyond the Brick’s video tour of this impressive diorama:

This scene has six different motors that animate minifigs and booby traps, as well as cycle the rolling boulder back into position. As far as I’m concerned it’s a LEGO masterpiece. I would love to see what this guy could do with Temple of Doom and am looking forward to monkey brains, mine carts and of course, a LEGO Mola Ram pulling a heart out of a chest.