If Thanos had started off as a clown performing at a kid’s birthday party, this is the Infinity Gauntlet we would have seen – right before he turned half the kids to dust. It’s a pretty cool work of balloon art actually. This awesome inflatable gauntlet was twisted into creation by balloon artist Jackie Ochitwa of With a Twist Balloon Creations. 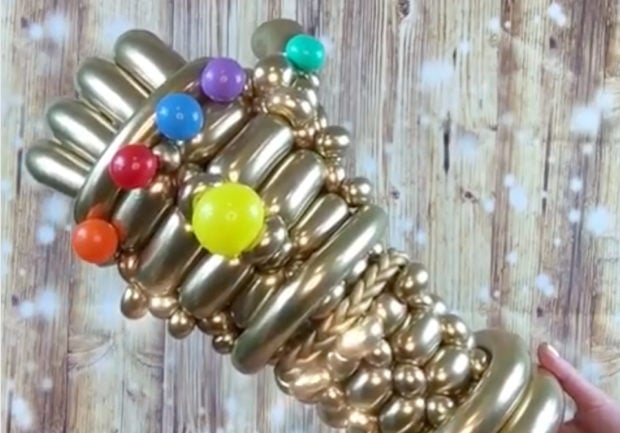 And while this may be a balloon creation, it looks like the stones even light up! That’s pretty cool. This artist is definitely the mad titan of balloon animals. It looks pretty solid, like it has some weight to it. However, I’m pretty sure that if you wear this thing and snap your fingers, half of the people in the world disappear and turn into balloon animals instead. If the real Infinity Gauntlet had been made like this, the Avengers would have had a much easier time stopping Thanos – all they need is a pin.

So shiny. 🤩 Made this for a pretty cool kid who’s Marvel crazy. 🍿 Just a few more sleeps until Endgame!! #infinitygauntlet

This thing is really twisted man. Some people like it, others say that it blows. And if you want more balloon jokes, I’m fresh out of helium.