The NV-U71T is Sony’s latest entry into the portable GPS navigation arena. 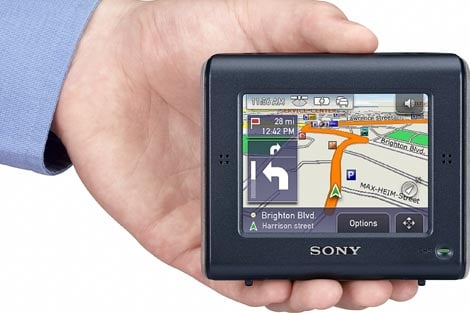 The new model is their first to feature a RDS-TMC traffic receiver which provides real-time traffic data and can automatically plot an alternative course around heavy traffic areas. The traffic data costs $4.95 per month after an initial 90-day free trial.

The device’s 2GB of flash memory comes comes preloaded with maps for the U.S. (including Hawaii, Alaska and Puerto Rico) as well as Canada. Directions are displayed on a 3.5″ color touch-screen display with a voice-guided option for safety. It’s also more compact than Sony’s previous model, and features a new gesture-based input system that makes it easier to get to frequently used commands.