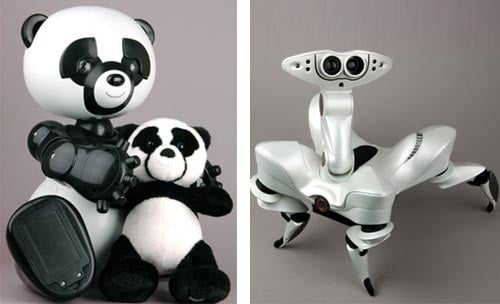 The $229 Robopanda is geared towards children will be able to interact with the world via a variety of touch, infrared and audio sensors. Robopanda’s movements include sitting, walking, crawling, rolling over and hugging. The panda will tell stories, track objects, sound sources and can avoid obstacles. Hopefully, it can avoid the downright ugly looking Roboquad.

Looking like one of the creepy crawlers out of Resistance: Fall of Man or Half Life 2, the $119 Roboquad scurries along on four legs and will be able to navigate in the dark. That way, it can sneak up on your unsuspecting roommate while he’s sleeping (before eating him alive).