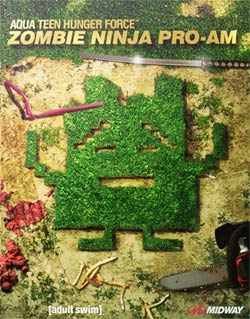 Midway and Cartoon Network have revealed that they’re working on a new game based on the popular Adult Swim cartoon, Aqua Teen Hunger Force. The game, titled Aqua Teen Hunger Force Zombie Ninja Pro-Am, will be an action-adventure game featuring “combat golf” (whatever that means,) cart racing among other things.

According to ATHF series creators Matt Maiellaro and Dave Willis, “This golden chalice represents a new age in gaming, the likes of which has never before been seen on this planet. The weak will tremble at the awesomeness of our full color, hand-made graphics!” With an endorsement like that, I can only imagine that the game will be better than God of War, Halo, Super Mario Brothers and Grand Theft Auto 3 all rolled into one.

The game is expected to hit stores this Fall for the PlayStation 2, following the release of the upcoming ATHF movie, coming out this April.