The Clone Wars: Xbox 360 Vs Playstation 2

You’ve got to hand it to these junkmeisters for their creativity. Check out these slightly familiar video game consoles from a schlock shop down in Mexico. 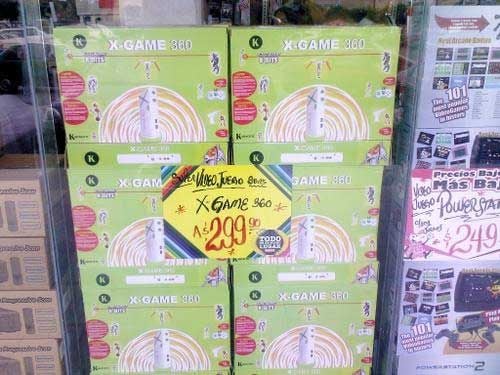 I’m not sure whether I like the X-Game 360 or the PowerStation 2 better, but these cheap packaging copies are clearly designed to fool some unsuspecting buyer into thinking they’re getting a great deal on a real console. Instead, they’ll be sorely disappointed when they open the box to discover some 8-bit NES clone wrapped in sheep’s clothing. (Unless you’re like me and like playing old NES games).

The good news is that those prices aren’t in US Dollars, they’re Mexican Pesos (that $ symbol threw me off too). So anybody who does end up buying one of these will only be out around 25 bucks.