A Fire Breathing, Car Killing Robot of Your Very Own

Remember the Robosaurus? Let me refresh your memory. The gigantic robotic dinosaur looks like a metal, fire-breathing Tyrannosaurus Rex, and might be just about as fierce. Capable of picking up cars, then crushing them with its razor-sharp jaws, I certainly wouldn’t want to run into one in a back alley. 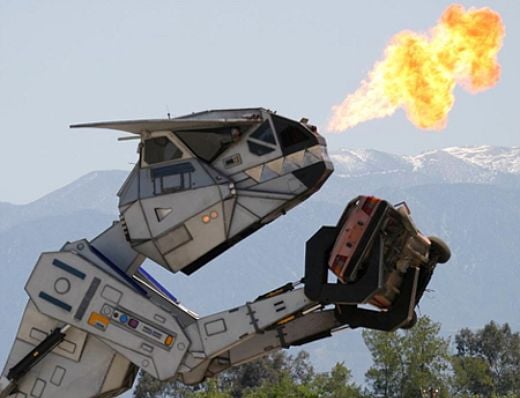 So it’s with much glee that I report that the Robosaurus is up for auction. That’s right, you can own the giant beast and put it on your front lawn to chomp on unpleasant neighbors (or at least melt their cars). That’s assuming you can get it past your nosy neighborhood association — though they’d be the first ones I’d feed to the giant metal automaton.

Created by inventor Doug Malewicki all the way back in 1989, the 40-foot tall robot can shoot 20-foot flames from its nostrils, and can crush metal with up to 20,000 pounds of force. If you’re interested in throwing your hat into the ring for this bad boy, you can find more details at Barrett Jackson Auctions.