The last thing you ever want to see on your good old iPod is the sad iPod icon. This usually tells of some sort of nasty failure of your iPod’s software or hardware, and is often a sign that you’ll soon be heading out to the Apple Store to pick up a brand new iPhone or iPod Touch. So I find it amusing that anyone would want to immortalize their sad iPod as a piece of art. 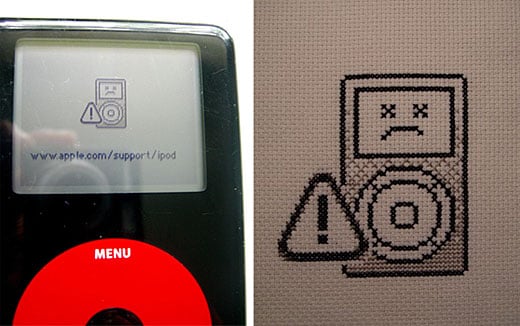 But that’s exactly what craftster contributor benjibot decided to do with this wacky sad iPod cross-stitch. Apparently, benjibot’s 4G iPod finally kicked the bucket a few days back, and served as inspiration for his design.

I guess you could think of the cloth like a mini-memorial to the deceased media player, to be laid over a tiny cardboard casket before it’s lowered into its final resting place in the dumpster.